To eat crow is to be humiliated and shamed after being shown to be wrong or to be forced to admit one’s error and be publicly shamed as a result. 1Spears, Richard A. McGraw-Hill’s American Idioms Dictionary. Boston: McGraw Hill, 2008., 2Ammer, Christine. American Heritage Dictionary of Idioms]. Boston: Houghton Mifflin Harcourt, 2013.

“Doug’s parents ransacked his bedroom, convinced he was hiding drugs. They made a big mess but found nothing and were forced to eat crow.”

“The reporter was forced to eat crow after he ran a story about the senator’s alleged affair, only to find out later that his source had mixed up the senator with another person with the same name.” 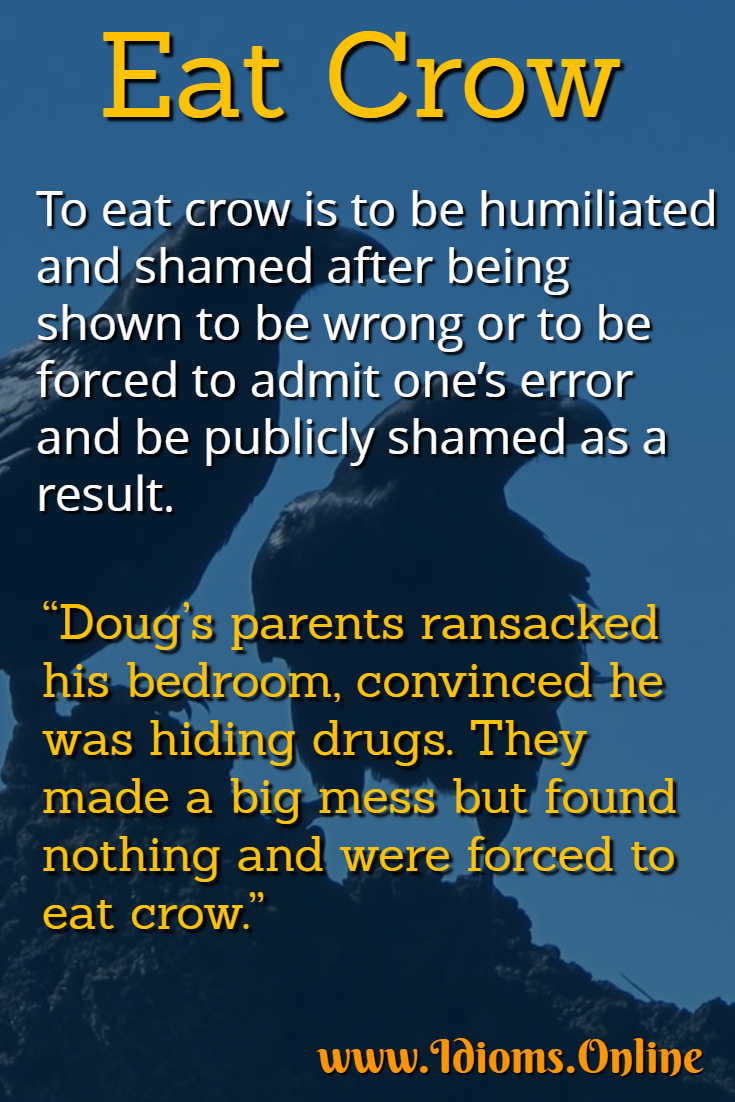 The origin of ‘eat crow’ is not really known, but one story claims that it arose during the War of 1813 when a British officer made an American soldier eat part of a crow that the soldier had shot in British territory. Although humans have eaten crow when other meat was in short supply, it is said to taste terrible, hence the allusion. 3Ammer, Christine. American Heritage Dictionary of Idioms]. Boston: Houghton Mifflin Harcourt, 2013.

A variant expression, “if you have to eat crow, eat it while it’s hot” means that if you make a mistake it is best to admit it quickly and show contrition, thus putting it behind you sooner. The quicker one admits to their mistake, the less damage will be done. This statement is attributed to Alben W. Barkley, vice president for Harry Truman, who was speaking particularly to politicians in regards to political and personal scandals. 4Troy, Eric. “Eating Humble Pie: How Did This Expression Come About?” Culinary Lore, 29 May 2018, .