Meaning of Idiom ‘A Dime a Dozen’

Something that is a dime a dozen is very common and easily found; plentiful and of little to no value; common and therefore cheap. 1 Ayto, John. Oxford Dictionary of English Idioms. Oxford: Oxford U, 2010. 2Heacock, Paul. Cambridge Dictionary of American Idioms. Cambridge: Cambridge UP, 2010. 3Goodbrand, Allan. Know Your Onions: a Light-Hearted Look at Popular Idioms and Sayings. Book Guild Publishing, 2015.

This expression can refer to a thing or a person. Although cost (a dime) is mentioned the expression does not always refer to the subject being cheap or inexpensive but simply plentiful. Cheapness may also be implied, but never when a person is the subject.

“I asked my boss for a raise today. Not only did he refuse, he told me workers like myself are a dime a dozen!”

“Those toy prizes at carnivals are are a dime a dozen.”

“Romantic comedies are a dime a dozen and they’re all the same!” 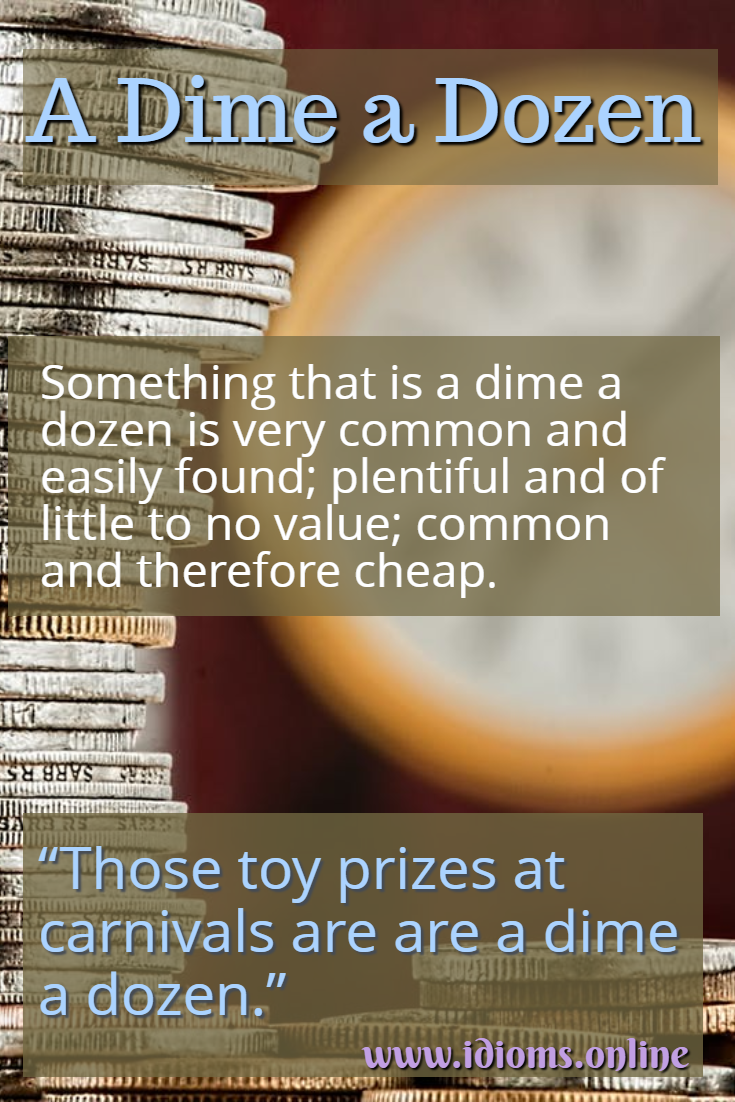 A dime refers to a ten-cent piece in the U.S., declared so by the Continental Congress in 1786. A dozen is twelve of any item. 4Ammer, Christine. American Heritage Dictionary of Idioms. Boston: Houghton Mifflin Harcourt, 2013.The dime has been used in many American expressions to mean ‘cheap’ or ‘small.’ 5Ayto, John. Oxford Dictionary of English Idioms. Oxford: Oxford U, 2010.

This idiom alludes to something being so common that twelve can be bought for only ten cents, or, in other words, less than one cent each. However, the purpose of the phrase is not necessarily to convey cheapness as much as it is to emphasize that the item is plentiful and valueless.