Meaning of Idiom ‘Put Something on the Back Burner’

To put something on the back burner is to give it a lower priority or to delay giving it attention or working on it; Something that is on the back burner is not forgotten, it is simply a lower priority than other things. 1Heacock, Paul. Cambridge Dictionary of American Idioms. Cambridge: Cambridge UP, 2010. 2Brenner, Gail Abel. Webster’s New World American Idioms Handbook. Wiley, 2003.

Putting something on the front burner is the opposite of putting it on the back burner, but the latter is more commonly used.

“I had to put my vacation plans on the back burner. I just have too much work to do.”

“The expansion is on the back burner for now but we plan to revisit it within the next year.”

“He always put his job on the front burner and as a result, his marriage fell apart.”

“We have to revisit these back-burner issues,” said the Councilman. 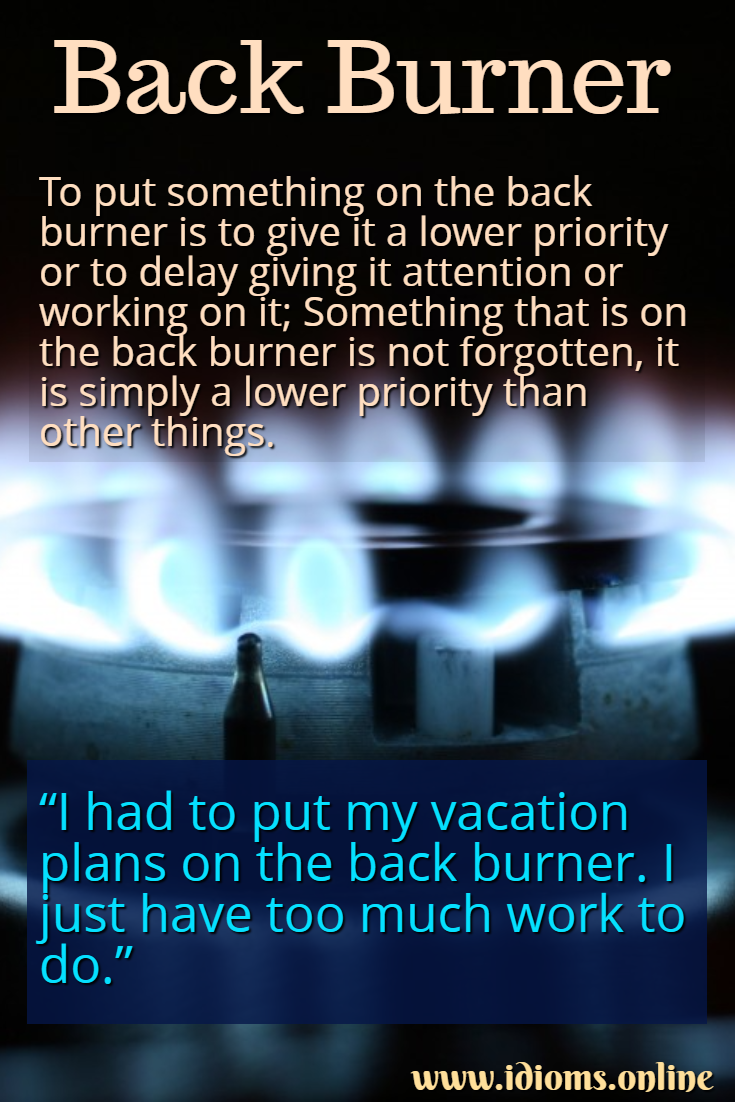 This idiom has a culinary origin. It could easily refer to modern stoves, which have front and back burners. A cook will place items which need less attention, stirring, etc. on the back burner while paying more attention to those on the front burner. It has been speculated that this idiom refers to old-fashioned wood or coal-burning stoves, in which the back burner was traditionally a warming burner. However, such stoves did not have burners. Although circles may have been present, the entire surface of the stove could be used. However, different areas of the stove would have warmer or cooler temperatures depending on the position of the firebox underneath, which would be on the right or left. In any case, the idiom did not come into use until the mid-1900’s 3Ammer, Christine. American Heritage Dictionary of Idioms. Boston: Houghton Mifflin Harcourt, 2013.  when gas ranges were on the market. Although older gas stoves and modern gas or electric stoves may feature burners with several different ranges of heat, including a low-heat simmer burner. Regardless of the specifics, items cooking on a back burner are usually being cooked at a lower heat or being kept warm, while other foods are being attended to on the front burner.