Behind the Eight Ball: to be in a difficult or awkward situation; to be at a disadvantage; to be out of luck, in a losing position; to be baffled as to what to do or how to proceed. 1Ammer, Christine. American Heritage Dictionary of Idioms. Boston: Houghton Mifflin Harcourt, 2013. 2Heacock, Paul. Cambridge Dictionary of American Idioms. Cambridge: Cambridge UP, 2010. 3 Ayto, John. Oxford Dictionary of English Idioms. Oxford: Oxford U, 2010.

“The detective was behind the eight ball and had a lot of work to do to solve the case.”

“We’re really behind the eight ball on this latest house flip. We just found cracks in the foundation and tons of mold to remediate.” 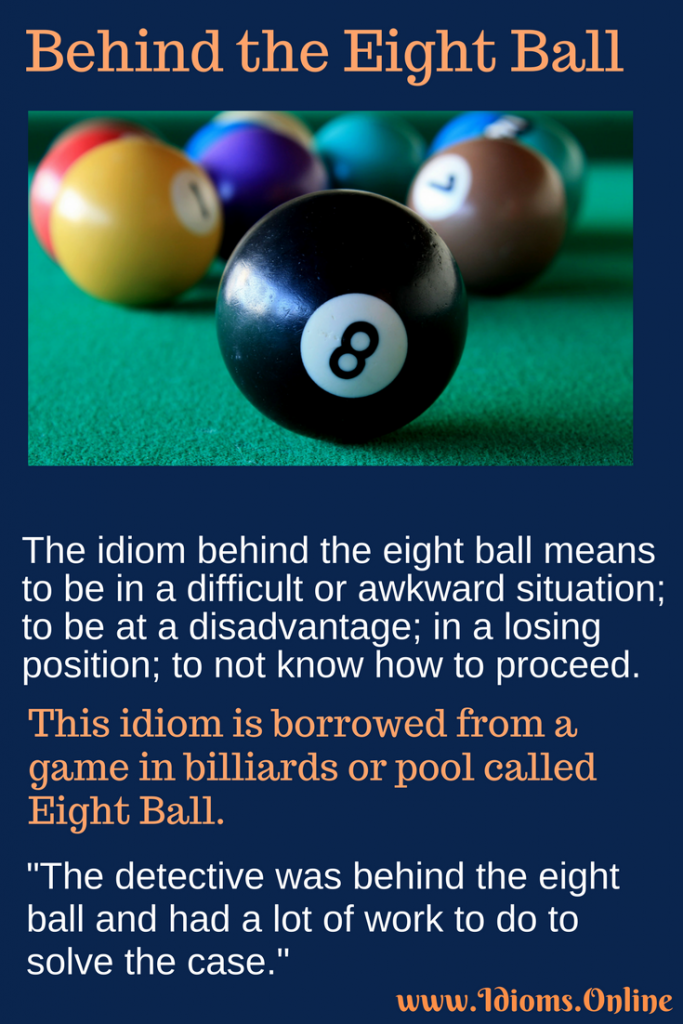 The idiom ‘behind the eight ball’ is borrowed from a game in billiards or pool called Eight Ball. In this game, the balls, which are numbered one through eight fifteen, must be hit into a pocket in numerical order, before the eight ball, which must be pocketed last. One player plays balls one through seven, the solid colored balls, and the other plays balls nine through fifteen, the striped balls. Although the rules of the game are more complicated, the idiom refers to a situation in which a player is trying to make a shot in which the ball they are trying to pocket is positioned behind the eight ball, making it a very difficult shot to make.

According to author Josh Chetwynd in The Field Guide to Sports Metaphors, Charles E. Peterson, who was the president of the Billiard Association of America at the time, claimed that the expression did not actually come from the game of Eight Ball at all. He said that it was coined by a fellow named Allie Flint at some point between 1914 and 1916, during a betting game in which wagerers pulled small numbered balls from a bag. Whoever drew the smallest number won. In a game with ten or more players, anything over eight had very little chance of winning. Allie Flint, said Peterson, was very unlucky in the game and would draw the nine more than anyone else.

Flint, at some point, after losing again and again, said “There I am behind the eight ball again.” Peterson said this expression then spread like wildfire all over New York, and from there throughout the conuntry.

In truth, the expression did not really spread until after the game of Eight Ball become very popular, during the 1930’s. As well, it does have a particular meaning in the game. 4Chetwynd, Josh. The Field Guide to Sports Metaphors: A Compendium of Competitive Words and and Idioms. Berkeley: Ten Speed, 2016.

There are many common expressions that are claimed to have been originated by one person at one particular occasion. Oddly enough, these stories often occur in bars, just as the story Peterson told. They are impossible to validate and are usually myths cooked up after the fact. Peterson, again according to Chetwynd, did not recount his story until 1941 in an interview for a column. If he had told it, perhaps, during the 1920’s, around the time the idiom first came into use, we might lend it more credence. Since a person would not bother to claim an origin story for an expression that was not widespread, such claims are always behind the eight ball.