Meaning of Idiom ‘Between a Rock and a Hard Place’

To be between a rock and a hard place means to have to choose between two equally undesirable choices; to be in a very difficult situation. 1Ammer, Christine. American Heritage Dictionary of Idioms. Boston: Houghton Mifflin Harcourt, 2013.,2Ayto, John. Oxford Dictionary of English Idioms. Oxford: Oxford U, 2010.

“Environmental protection leaves legislators between a rock and a hard place. While the majority wants natural resources to be protected, certain regulations can disrupt industries and impact thousands of jobs.”

“Having to decide against losing his business and asking his father for money left John between a rock and a hard place.” 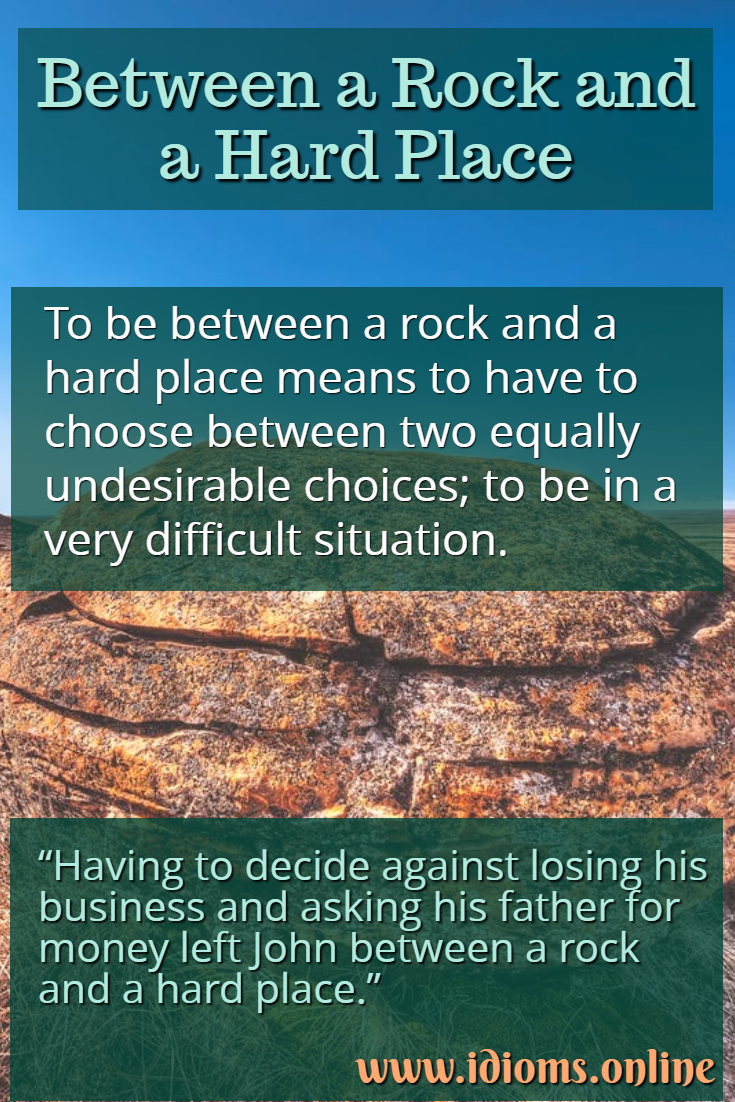 Used since the early 1900’s, it is the newest and most common version of idioms such as “between the Devil and the deep blue sea” and “between Scylla and Charybdis” and seems to be American.

Although how the phrase originated is not precisely known, according to the American Heritage Dictionary, the allusion is to being crushed between two rocks.1 A more logical assumption may be that the allusion is to being caught between impassable obstacles. The earliest known use in print was in the American Dialect Society’s academic journal known as //Dialect Notes Volume V, 1921:

“To be between a rock and a hard place, vb. ph. To be bankrupt. Common in Arizona in recent panics; sporadic in California.” 3Bengelsdorf, Peter. Idioms in the News – 1,000 Phrases, Real Examples. N.p.: Amz Digital Services, 2012.