Meaning of Idiom ‘Read Between the Lines’

To read between the lines is to look for or understand a hidden meaning, information, or an implied message that is not actually stated or obvious from outward appearance. 1Ayto, John. Oxford Dictionary of English Idioms. Oxford: Oxford U, 2010.,2Kirkpatrick, Elizabeth M. The Wordsworth Dictionary of Idioms. Ware: Wordsworth, 1995.,3Ammer, Christine. American Heritage Dictionary of Idioms. Boston: Houghton Mifflin Harcourt, 2013.

When you read between the lines, you are not taking something at face value.

The idiom is often applied to the written word but it can be used in regards to verbal statements, general information, or situations.

“I received a letter from Joanna. She says she’s doing fine but if I read between the lines, I think she’s unhappy and misses home.”

“The article did not actually state that the company was guilty of knowingly placing an unsafe product on the market but, reading between the lines, it is clear that there is suspicion.” 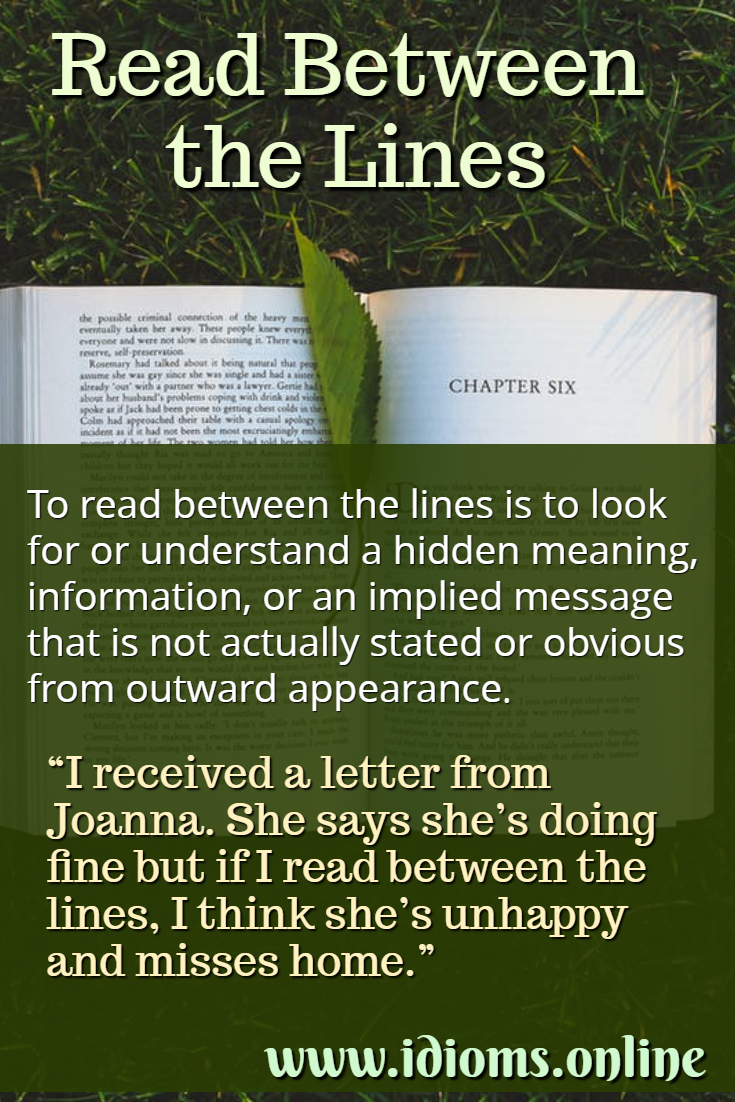 Used since the mid-1800’s, the idiom comes from cryptography. According to some sources, it derives from writing messages in invisible ink between the visible lines of a printed text. 4Kirkpatrick, Elizabeth M. The Wordsworth Dictionary of Idioms. Ware: Wordsworth, 1995.,5Bengelsdorf, Peter. Idioms in the News – 1,000 Phrases, Real Examples. N.p.: Amz Digital Services, 2012.

Another possibility is that the idiom comes from codes in which reading every second line of a text reveals a different message than reading all the lines. 6Ayto, John. Oxford Dictionary of English Idioms. Oxford: Oxford U, 2010.