Meaning of Idiom ‘Bite Off More Than You Can Chew’

To bite off more than you can chew is to take on more responsibility than you can handle; to try to do a job that is too big for you.

It can also be used in the past tense, as in “he bit off more than he could chew.”

“I know you want to write a great thesis but don’t bite off more than you can chew.”

“Nathan was already working two jobs. Now he’s taken a third. He’s definitely bitten off more than he can chew.” 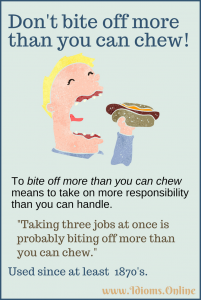 Although this idiom possibly has older origins relating to food, in America, it is said to have derived during the 1800’s in the American West, in regards to chewing tobacco, which came in solid ‘cakes.’ The expression referred to biting off a bigger piece of tobacco and you could chew, which could lead to swallowing. Swallowing tobacco can make you very ill, and in some cases, can be fatal.

Since humans often take bigger bites of food than they can comfortably fit in their mouth and chew well, which can lead to choking, the idiom probably has a more general origin.

The earliest printed uses in America appear to be from the 1870’s, such as in John Hanson Beadle’s Western Wilds (1878): “I was down as Manchester the day the hauled down the stars an’ stripes, an’ sez I, ‘Men, you’ve bit off more’n you can chaw;’ an’ they laughed at me.”

Idioms in the News by Peter Bengelsdorf turns up another use from the same year, in Ayer’s American Almanac (Lowell, Massachusetts): “It is a sign of a petty man to be always in a hurry. It shows that he has “bit off more than he can chew.”

Similar idioms are found in other languages such as the Italian. For example, don’t bite off more than you can chew, in Italian, is expressed as Non fare il passo piu lungo della gamba or “Don’t take a step longer than your leg.”