Meaning of Idiom ‘Chip on Your Shoulder’

To have a chip on your shoulder is to blame someone else (or other people in general) for something that has happened to you or things that have gone wrong and to be continuously angry about it, resulting in negative behavior.

Also, to be generally angry because you feel you have been treated unfairly, that you are not as good as other people, or haven’t had the same advantages as other people. 1McIntosh, Colin. Cambridge Advanced Learner’s Dictionary. Cambridge: Cambridge U, 2013.

Someone with a chip on their shoulder seems to always be looking for a fight. 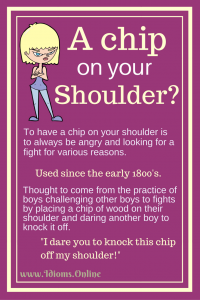 This idiom is always used in reference to someone else, not yourself. It is one of many negative character idioms. Often, the expression is followed by about and then the thing is revealed that has caused the person to act in this aggressive, angry way. This is not required, however.

“He continually brings up being self-educated and angrily criticizes those with formal schooling. I think he has a chip on his shoulder about not having been to college.”

“That new guy at work sure has a chip on his shoulder.”

“Chris, I like you and I consider you a friend but sometimes you have a real chip on your shoulder.”

If you’ve ever heard someone say “I dare you to knock this off my shoulder,” then you’ve heard the supposed origin of this idiom. It is said that in the Old West, boys who wanted to fight another boy would challenge them by placing a chip of wood on their shoulder and daring the other to knock it off, thus initiating a fistfight. This was a decidedly less dangerous version of the practice in Merry Old England of slapping a man in the face with a glove to challenge him to a deadly duel. 3Lennox, Doug. Now You Know Big Book of Answers 2. Toronto: Dundurn, 2008 And, it seems as good a way to avoid a fight as to get into one. It is doubtful that this was only practiced by boys (or men?) in the old West.

Used as an idiom in the United States since the early 1800s.