Meaning of Idiom ‘An Embarrassment of Riches’

An embarrasment of riches is an overwhelming abundance of something; having more of a good thing than one needs, especially if this makes it difficult to choose. 1Ammer, Christine. American Heritage Dictionary of Idioms. Boston: Houghton Mifflin Harcourt, 2013.,2McCarthy, Michael. Cambridge International Dictionary of Idioms. Cambridge University Press, 2002

To say someone has an ’embarrassment of riches’ does not mean that they are actually embarrassed by having too many possessions or too much money. Although it can simply refer to having an overabundance of something, it is especially used to indicate that there is so much to choose from, you find it difficult to choose just one. The idiom can refer to material possessions, skills, people, etc.

“His problem was always an embarrassment of riches. He chose his university by drawing from a hat.”

“When it comes to hotels, the town suffers from an embarrassment of riches.”

“Presently we have an embarrassment of riches in the form of digital information.”

It is widely claimed that this idiom owes its origin to John Ozell, who translated a French Play called L’Embarrass des richesses, into English and published this translation in 1735 (not 1738 as variously claimed…see image below: MDCCXXXV translates to 1735). 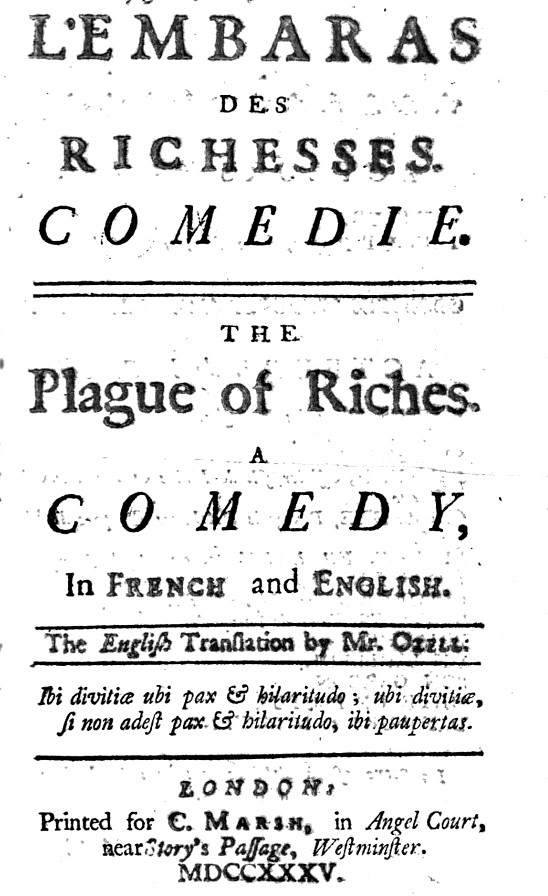 Although the title of the French play could indeed be directly translated into “an embarrasment of riches,” the problem with the claim that Ozell originated the idiom is that Ozell did not use this as his title. Instead, he called the play Plague of Riches.

Although embarrassment of riches has been used in English since at least the 1720s, earlier than Ozell’s translation appeared, it does not appear to have entered common use until the 1800s. Although the idiom clearly did not come from Ozell’s translation, it is possible that it came from the play, as the translation is a fairly easy one even for those who do not speak French. The play was performed in both England and Scotland in the original French language. It is not clear that Ozell’s English version was ever actually performed, however. See more discussion. 3 Deiss, Robert. “The Embarrassingly Wrong History of the Expression ‘Embarrassment of Riches.’” This Day in Quotes, Subtropic Productions LLC, 9 Oct. 2016, www.thisdayinquotes.com/2013/07/embarrassment-of-riches-l-des-richesses.html.