Also: To put it in a nutshell

Meaning of Idiom ‘In a Nutshell’

The idiom in a nutshell is meant to indicate that someone is expressing something in as simple a way as possible, using the fewest words possible; a concise and brief summary. 1Ayto, John. Oxford Dictionary of English Idioms. Oxford: Oxford U, 2010.,2Ammer, Christine. American Heritage Dictionary of Idioms. Boston: Houghton Mifflin Harcourt, 2013.

“In a nutshell, we are set to make a record profit this year.”

“Our vacation was horrible. In a nutshell, the hotel was a dump and it rained every day.”

“What is Joe’s problem?” asked Eugene. “Knowing Joe, its complicated, but in a nutshell, he’s angry that he wasn’t invited to your party,” replied Vicky. 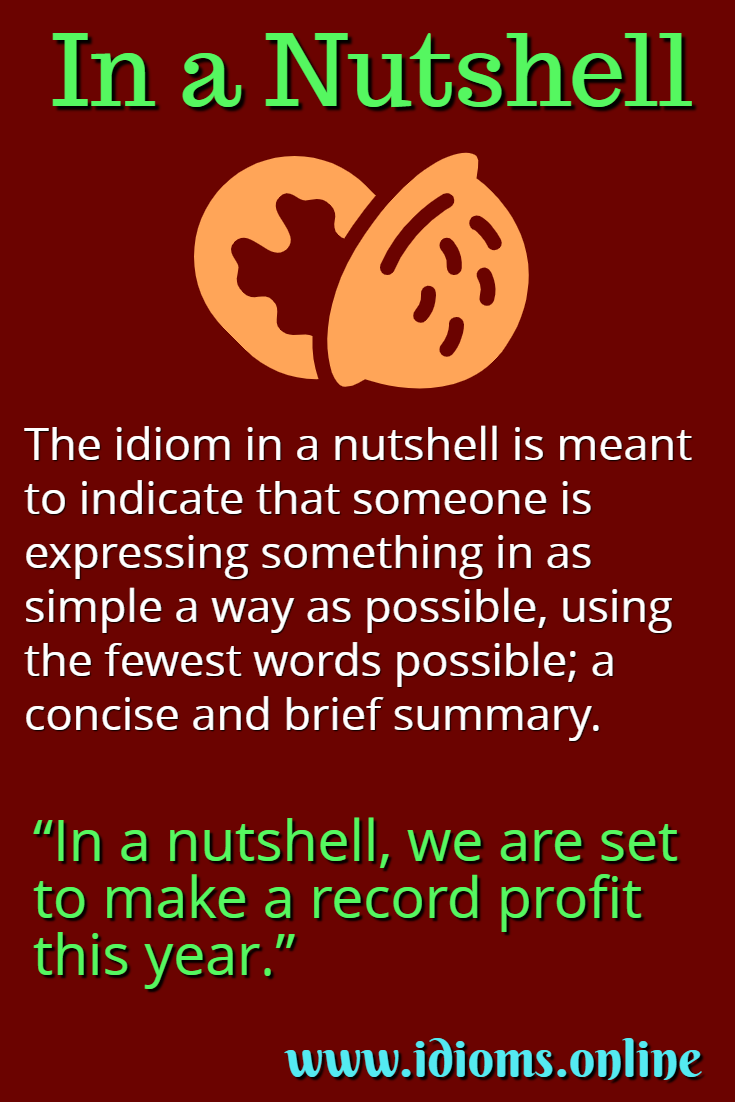 This idiom may have originated with the Roman writer Pliny, who, writing in the first century AD, quipped that Homer’s the Illiad was once copied into so tiny a hand that the entire work, all 24 books, could fit into a nutshell. A nutshell may have already been a common metaphor for a small space during Pliny’s lifetime.

The expression, at first, referred to anything that was compressed down to a small size but starting in the 1500’s it began to be applied more often to the spoken or written word. 3Ammer, Christine. American Heritage Dictionary of Idioms. Boston: Houghton Mifflin Harcourt, 2013.

“I could be bounded in a nutshell, and count myself a king of infinite space, were it not that I have bad dreams.” 4Ayto, John. Oxford Dictionary of English Idioms. Oxford: Oxford U, 2010.,5Brewer, Ebenezer Cobham. Dictionary of Phrase and Fable: Giving the Derivation, Source, or Origin of Common Phrases, Allusions, and Words That Have a Tale to Tell. Cassell and Co., 1898.