Football fans, of course, may be Mondy morning quarterbacks, and love to discuss what plays should have been called, etc. after a game has already been won or lost. In this way, they are similar to armchair quarterbacks, but only after the fact.

For a Monday-morning quarterback, “hindsight is twenty-twenty.”

“After the bridge collapsed, the Monday-morning quarterbacks were out in force but, in truth, nobody suspected the structural flaw in the steel which led to the event.”

“Everybody loves his column but he is a typical Monday-morning quarterback. He tells everyone what should have been done after things have already happened.” 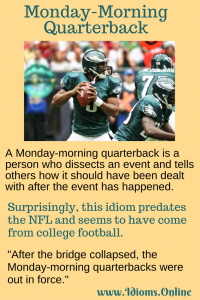 Since NFL (National Football League) games are a favorite Sunday pastime in America, it would stand to reason that the idiom Monday morning quarterback derived after the NFL was formed. People would watch the game on Sunday and then discuss it on Monday.

According to Josh Chetwynd in A Field Guide to Sports Metaphors, however, the idiom predates the NFL and it actually a product of college football. The author recalls a speech given by Harvard University quarterback Barry Wood in 1931, defending his sport against those who believe the sport was becoming too much a focus on college campuses. In his speech, as the New York Times wrote, Wood used the term Monday morning quarterbacks:

“The answer to overemphasis was to be found not on the field, but in the stands where sit what Wood called ‘the Monday morning quarterbacks.”

It is not clear whether Wood coined the term himself, but the New York Times article appears to be the first time it appeared in print. If he did coin it, it is a mystery why he chose Monday, as college games were played on Saturdays, making “Sunday morning quarterbacks” seem more likely. After Wood’s speech and the New York times article, however, the term became common and was expanded to its present more liberal meaning almost immediately. 1Chetwynd, Josh. The Field Guide to Sports Metaphors: A Compendium of Competitive Words and Idioms. Berkeley: Ten Speed, 2016.