To play second fiddle to someone is to be subordinate to them; to be of lesser importance.

“I’ve been with this company twenty years. I’m not going to play second fiddle to a kid just out of college.”

“Dr. Watson always seemed to play second fiddle to Sherlock Holmes but he was actually the most important character in the stories.” 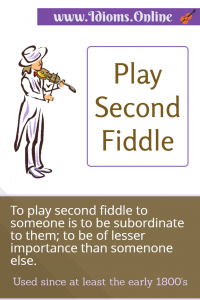 Used since at least the early 1800’s, this idiom derives from the role of violins in orchestras or string ensembles, which would have first, second, and third violins, etc.

Although the first violin is not technically more important than the second, the term brings to mind subordinacy and this transferred figuratively to the idiom.

Play first fiddle was used as an idiom even earlier, but it is no longer in common use.

The idiom play third fiddle, suggesting an even lesser role, although not as widespread as play second fiddle, is still used today.