Sometimes also used as “card up your sleeve.”

To have an ace up your sleeve is a familiar idiomatic expression which has been in use since at least the early 1900’s. 1Cresswell, Julia. Oxford Dictionary of Word Origins. New York: Oxford UP, 2010.

To have an ace up your sleeve or for someone else to have an ace up his sleeve means that they have a secret advantage, resource, or piece of knowledge which is unknown to others and held in reserve to be used when most needed. It has a similar meaning to having an ace in the hole.

This idiom is annoying overused in thriller and mystery novels, with lines such as “Having been set upon before, Nicholas always traveled with an ace up his sleeve. This time the ace was a razor, but it wasn’t up his sleeve, it was behind his belt…” 2Thor, Brad. Black List: A Thriller. New York: Emily Bestler /Atria, 2012 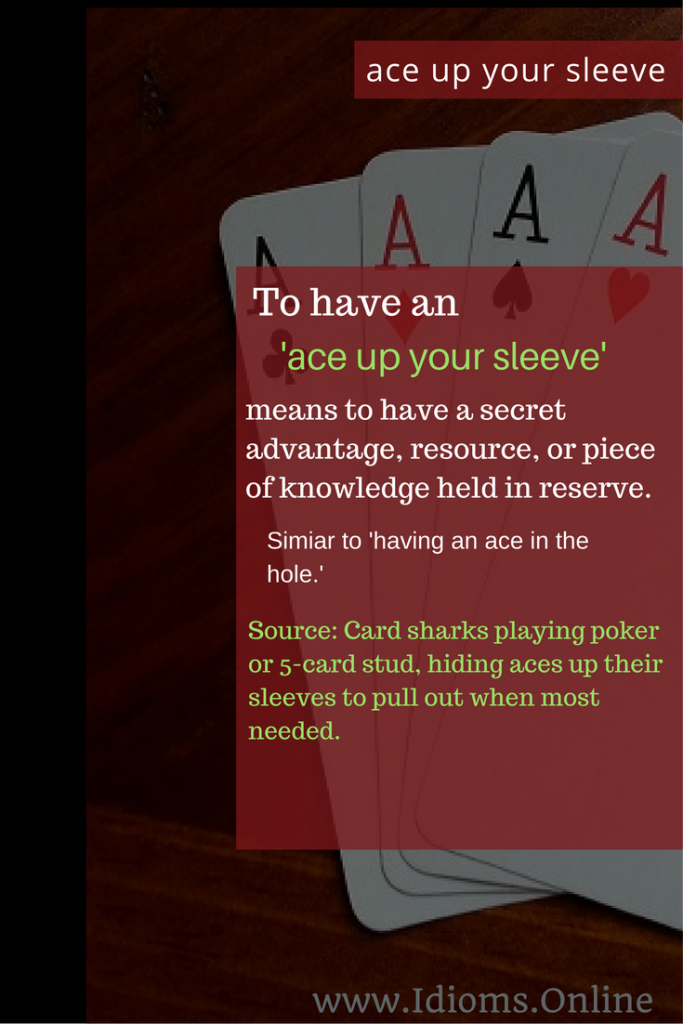 The expression “ace up your sleeve” comes from card games, where the ace cards are usually the highest ranking. A more specific origin is poker, or 5 card stud. The similar idiom having an ace in the hole refers to the dealer dealing an ace face down to a player, so that the other players can’t see it, giving the player an advantage unknown to the others. Having an ace up the sleeve, however, refers to cheating. Card sharks, who made their living traveling around and gambling in poker games, would often tuck an extra ace or two up their coat sleeve, to be pulled out when most needed. Both versions of the expression seem to be used in the same figurative sense, however, with neither having a more pejorative sense than the other.

According to Rosemarie Ostler in Let’s Talk Turkey: The Stories Behind America’s Favorite Expressions, the first figurative use of the expression didn’t appear until the 1920’s, such as from a book by titled Me—Ganster. This assertion appears to be incorrect, however. I was able to find earlier figurative uses of the expression, such as in the book His Master Purpose by Harold Bindloss, published 1903.

The word ace used for playing cards comes from an Old French word as, meaning a single unit (such as currency). This was originally used as the name of a dice marked with one spot them, and later as a card marked with one spot. The middle English word as gave way to the modern word ace. The word ace being applied to the highest card caused it to be associated with excellence and this is why fighter pilots who shot down many enemy aircraft during war came to be called ace. Later, this was extended to any one who showed great ability.