Also: In the end

Meaning of Idiom ‘At the End of the Day’

At the end of the day is a quite commonly used and misunderstood idiom since it makes literal sense if used to actually refer to the end of the day. When used as an idiom, it has a similar meaning to the idiom when all is said and done: In the end, once all things are taken into consideration and regardless of whatever else happens or comes up, the final point is…”

In the end or at the end of the day can refer to any period of time, or process, etc. and does not have to refer to an actual period of one day.

Many people seem to find this idiom irritating. Why this is so is anybody’s guess, but it may be because they find it meaningless or cliched. However, many idioms are used so often they become cliches. To be fair, this idiom packs a lot of punch into a little package, even if it is not always clear exactly what is being expressed.

The best way to understand this idiom is to read examples of its use.

“I know everybody wants their opinions heard, but at the end of the day, the main problem in the store is inventory control.”

“I decided to buy cheap paint at the hardware store, but at the end of the day I ended up spending more money and having to repaint twice as often.”

“Franz was struggling to make a living with his art. He sold very few paintings. Still, at the end of the day, he was an artist and it was the art that drove him.” 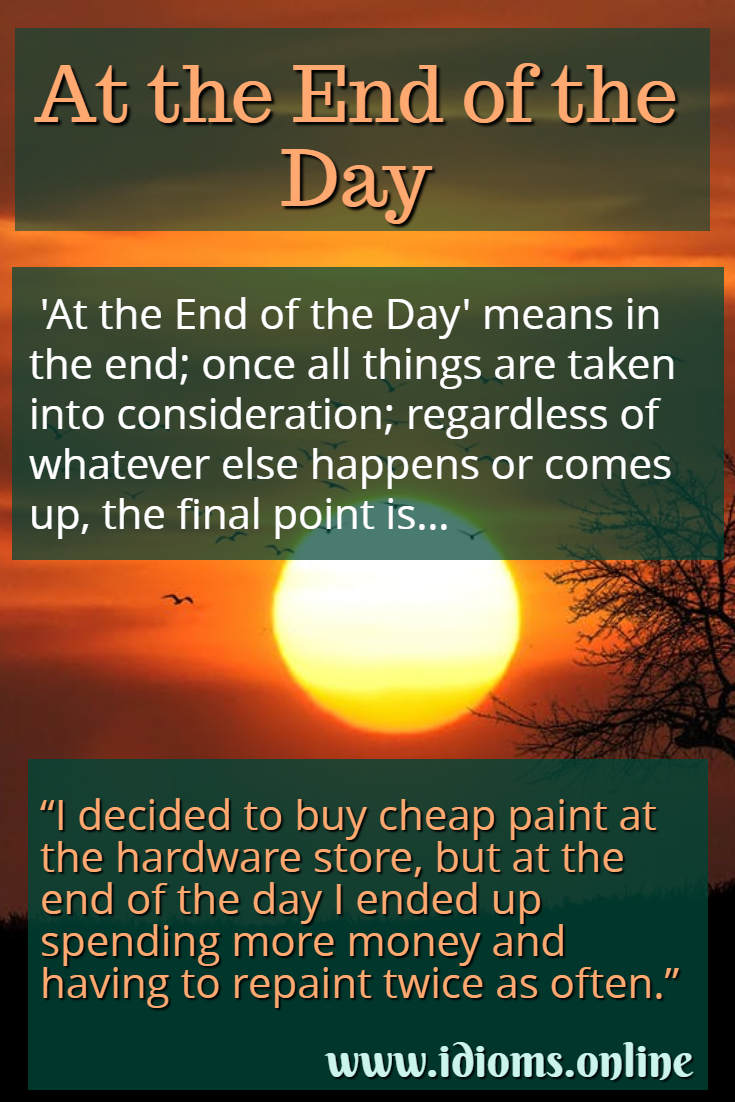 It is very difficult to trace the earliest figurative uses of this phrase since it is so commonly used to refer literally to the end of a day. Brian Ashcroft, in Jargonaut Express, managed to uncover a very early and seemingly figurative use from the late 1800’s, in an autobiography of biologist Thomas Henry Huxley:

“The last thing that it would be proper for me to do would be to speak of the work of my life, or to say at the end of the day whether I think I have earned my wages or not.”

Huxley does seem to be referring to the end of his life or career, and saying “the last thing it would be proper to do, in terms of my work, would be to say, when all is said and done, whether I have earned my wages or not.”

When the expression became common is, however, unknown. It was in use by at least the 1950’s.