Meaning of Idiom ‘Bite the Bullet’

To bite the bullet is to accept or confront a difficult situation with courage and stoicism; to accept the truth of a situation; to bravely pay the price of a bad situation; to force yourself to do something you dislike. 1Jarvie, Gordon. Bloomsbury Dictionary of Idioms. London: Bloomsbury, 2009.,2Spears, Richard A. McGraw-Hill’s American Idioms Dictionary. Boston: McGraw Hill, 2008.,3Ammer, Christine. American Heritage Dictionary of Idioms. Boston: Houghton Mifflin Harcourt, 2013.,4McIntosh, Colin. Cambridge Advanced Learner’s Dictionary. Cambridge University Press, 2013.

“At some point, you’re going to have to bite the bullet and stop spending all your money on luxuries,” said Susan’s mom.

“Going to prison forced me to bite the bullet and stop drinking.”

“The CEO bit the bullet and surrendered to demands for him to step down from his post.” 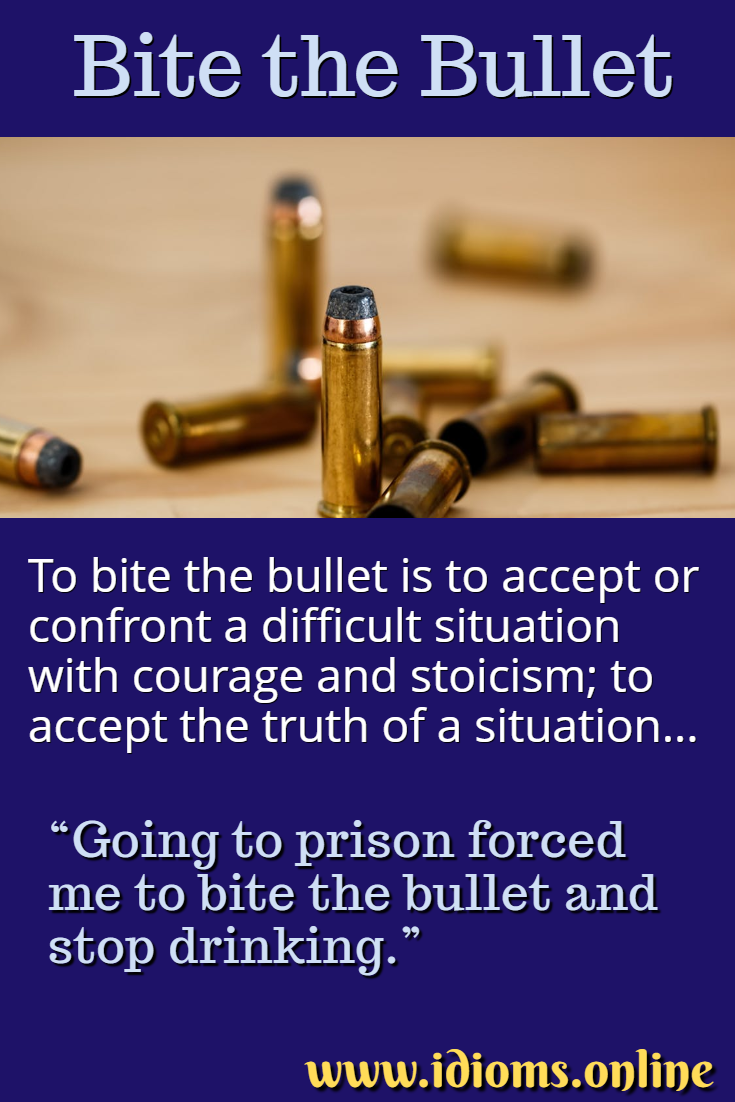 Dating from the 1700s, this idiom is said to be of military origin. Before anesthesia was invented, army doctors performing surgery, setting bones, or cleaning wounds would have their patient bite on a lead bullet or some other object to help endure the pain and stop them from crying out. A bullet may seem an odd choice but the soft lead used meant that they would absorb the pressure of the bite without damaging the teeth. 5Ammer, Christine. American Heritage Dictionary of Idioms. Boston: Houghton Mifflin Harcourt, 2013.,6 Ayto, John. Oxford Dictionary of English Idioms. Oxford: Oxford U, 2010.

Also, according to the 1796 Dictionary of the Vulgar Tongue by Francis Grose, soldiers (or grenadiers, specifically) being punished for infractions with a whip would bite on a bullet so that they would not show weakness by crying out in pain.

The phrase appeared figuratively in an 1891 Rudyard Kipling story called The Light that Failed:

Another suggested origin is that the expression came from the practice of gunners biting off the end of a paper cartridge of gunpowder to expose the powder to a spark. 8Ammer, Christine. The Dictionary of Cliches: a Word Lover’s Guide to 4,000 Overused Phrases and Almost-Pleasing Platitudes. Skyhorse Publishing, 2014. How this practice could have anything to do with the figurative use of the idiom today, however, is difficult to understand.