To burn your bridges means to take an irrevocable step that makes it impossible to go back to a previous position, situation, etc. Specifically, it means to behave in such a way as to ruin your relationship with someone, making it very difficult to have a productive relationship with them in the future. A common example is to act negatively when leaving a job so that you will never be able to return.

Another play on the idiom is “to burn your bridges in front of you,” meaning to make decisions or behave in such a way as to create future problems for yourself.

In normal use, the idiom is sometimes rendered as a fuller expression in the form of advice or warning: “Don’t burn your bridges behind you.” 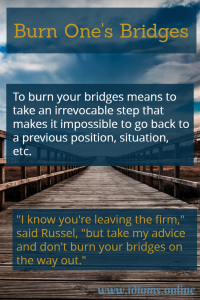 “I know you’re leaving the firm,” said Russel, “but take my advice and don’t burn your bridges on the way out.”

“I have no choice to succeed in my clothing business. I’ve burned too many bridges to go back now.”

Used since the late 1800’s, this idiom alludes to the military practice of burning bridges over rivers in order to prevent the enemy from crossing. However, in so doing, they would also prevent themselves from being able to retreat back the way they had come, thus making them vulnerable to an attack from the front. This lead to the proverb “don’t burn your bridges behind you.”

And older but related 18th-century expression “burning your boats” has similar origins and meanings.