Also: water over the dam

Meaning of Idiom ‘Water Under the Bridge’

The idiom water under the bridge is used to refer to something that is in the past, cannot be changed and should not be considered important or worth being concerned or worried about. 1Ayto, John. Oxford Dictionary of English Idioms. Oxford: Oxford U, 2010., 2Ammer, Christine. American Heritage Dictionary of Idioms. Boston: Houghton Mifflin Harcourt, 2013.

This expression is especially used to refer to past events or situations that were unfortunate. An argument between two friends might be considered ‘water under the bridge.’ 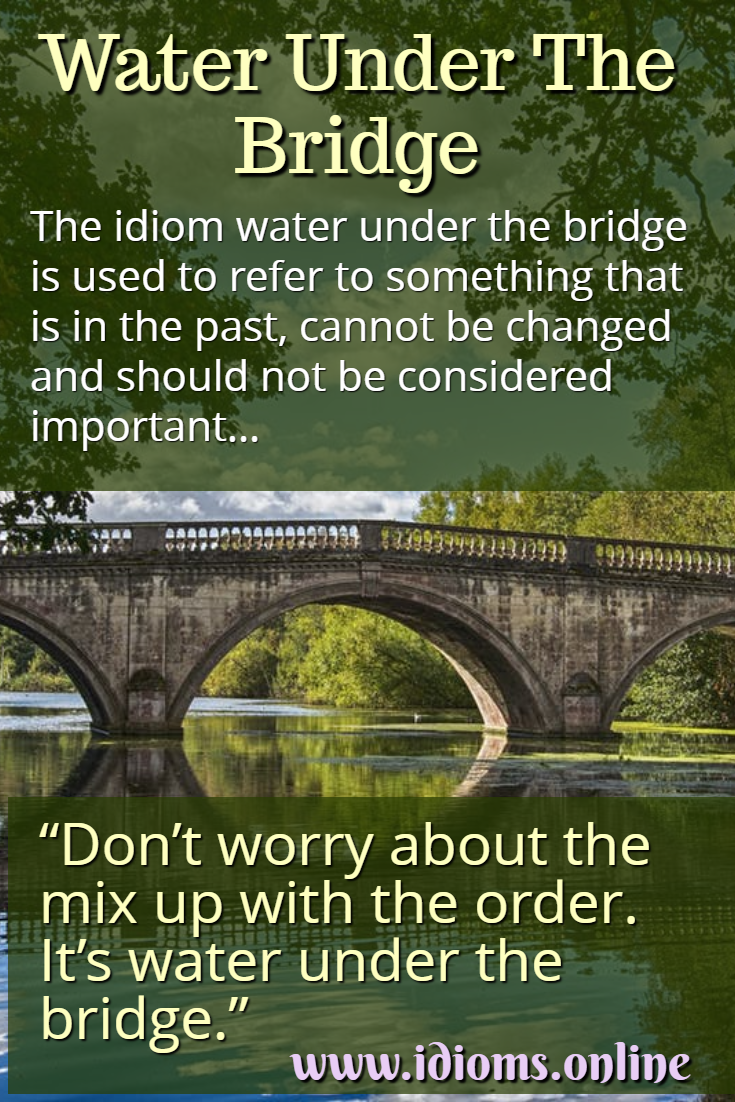 “Thanks for helping me out with this deadline. I know we’ve had our problems in the past,” said Sheila. “All that’s just water under the bridge,” replied Logan.

“Don’t worry about the mix up with the order. It’s water under the bridge.”

The present variation probably derived from the earlier expression “there’s been a lot of water under the bridge since…,” which was used to point out that a lot of time had passed and much had happened since one particular event had occurred. Both expressions refer to the fact that once water has passed by, it is gone forever and cannot be retrieved.

The present variant has been used since the late 1700’s or early 1800’s. The variant water over the dam, which refers to water passing over a spillway as opposed to water flowing under a bridge, is a North American variant used since the late 1700’s. 3Ayto, John. Oxford Dictionary of English Idioms. Oxford: Oxford U, 2010., 4Ammer, Christine. American Heritage Dictionary of Idioms. Boston: Houghton Mifflin Harcourt, 2013.