To call a spade a spade is a very old expression that has roots in ancient Greek. This idiom is often thought to have racist origins, but, as you will read below, this is not true.

Meaning of Idiom ‘Call a Spade a Spade’

To call a spade a spade is to speak plainly and truthfully, even if the truth contains criticisms, bad news, or is unpleasant to hear. This idiom is often used when someone is about to say something rude, offensive, or insensitive and is not necessarily a precursor to a truthful statement. When someone says “let’s call a spade a spade,” they want to be “brutally honest.”

“Let’s call a spade a spade, those people are lazy and shiftless.”

“Let’s call a spade a spade. Some people are just too lazy too work.”

“C’mon Dr. Stedman, let’s call a spade a spade and get on with it. What’s wrong with me?” 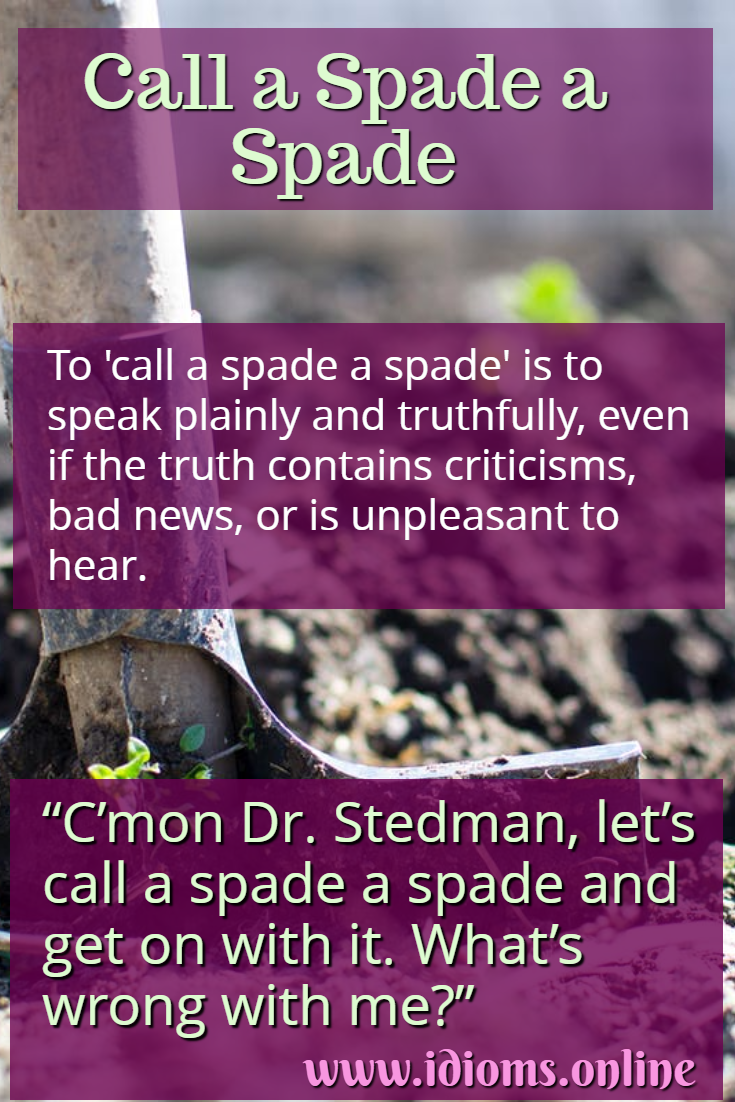 The spade being referred to here is not the suit of cards and there was originally no racist element. The intention was to invoke the digging implement. Interestingly, it does not originate from a complaint about spades being called shovels or ‘garden implements’ but in an ancient mistranslation. The ancient Greeks had a similar expression in “call a trough a trough.” Trough is sometimes given as kneading-tray. The expression still survives in modern Greece.

Trough became spade in modern English. We owe this to Erasmus, who in his Apophtegms (1531) mistranslated the ancient Greek word for kneading-trough into ligonem, the Latin word for ‘hoe.’ When Nicholas Udall translated Erasmus into English, in 1542, he translated ligonem into spade. The phrase is found in Demostenes’ oration “Olythus,” quoting Philip of Macedon:

Philippus aunswered that the Macedonians wer feloes of no fyne witte in tehir termes but altogether gross, clubbyshe, and rusticall, as they whiche had not the witte to calle a spade by any other name then a spade.

The full saying is sometimes given as call a fig a fig and a kneading-trough a kneading-trough but the ‘figs’ seem to have been added by Menander. Lucian, later, took out the figs but added in plums and pears.

Primitive spades were not the metal digging tools we know today. They were instead quite simple wooden blades with handles.

The use of the word spade as a racist term for a black person caused many to believe, later, that the expression was original to this use, and thus had racist connotations. Since many people do use the idiom in this racist, or otherwise rude, context, the association is, unfortunately true, although not the true original source. This idiom is best avoided.