Meaning of Idiom ‘Rise from the Ashes’

To rise from the ashes means to be rebuilt or renewed and to return as new after being destroyed. 1Ayto, John. Oxford Dictionary of English Idioms. Oxford: Oxford U, 2010.,2Ammer, Christine. American Heritage Dictionary of Idioms. Boston: Houghton Mifflin Harcourt, 2013.

This idiom can be used in various other forms without losing meaning, such as:

The expression often is used to refer to structures, cities, etc. which have been destroyed. 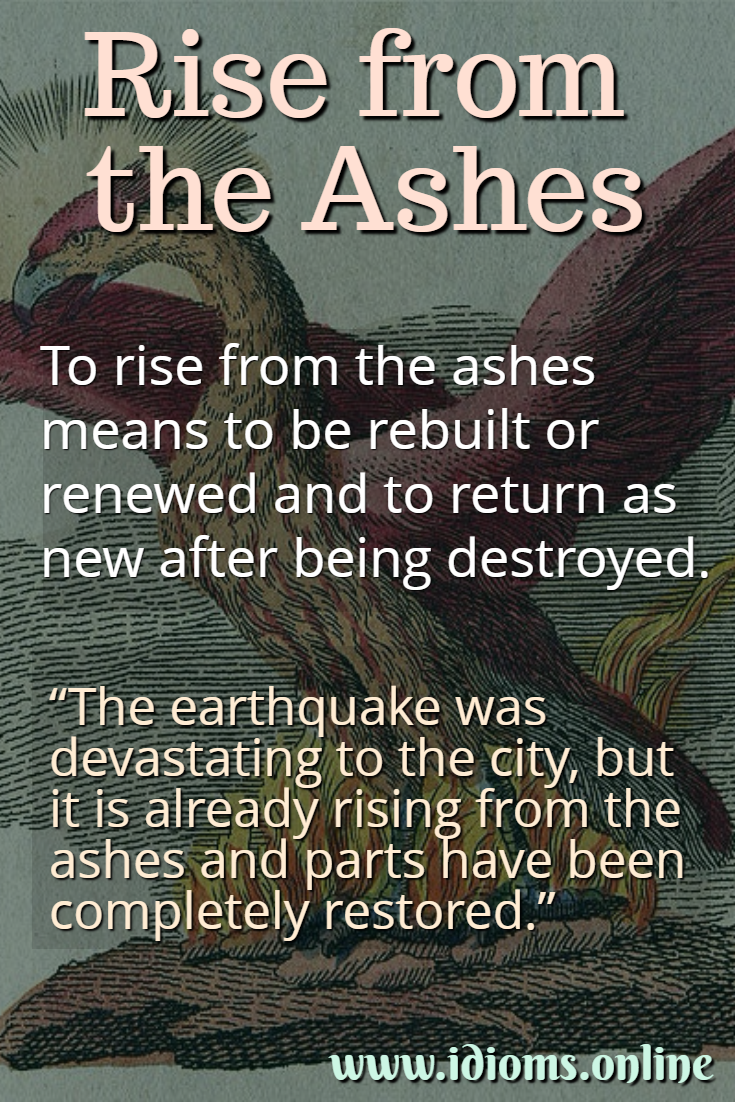 “The earthquake was devastating to the city, but it is already rising from the ashes and parts have been completely restored.”

“The company’s public image crises caused it to lose millions, but if recent returns are any evidence, it will rise from the ashes.”

“After losing his re-election campaign for governor because of his alleged crimes, like the Phoenix that rises from the ashes, he managed to secure the Republican nomination for president.”

The Phoenix is the Greek name for a mythological bird the Egyptians called the bennu, both words that actually mean “palm tree.”

The Phoenix, said by the Egyptians to live in the “land of the Arabs” was a bird with red, orange, and gold colored feathers, resembling an Eagle. This bird, considered by the Egyptians to be the sacred bird of the sun-god, lived for 500 years before it dies and is then reborn. There are several accounts as to how this actually occurred.

In summary, at the end of the bird’s 500-year life-cycle, it made a nest made of spices (frankincense and casia) and, at the stroke of dawn, begins singing a beautiful song. Then, when the sun rises and its rays hit the nest, it catches fire, and the Phoenix begins to sing its own funeral hymn, while it burns.

All that is left of the Phoenix is a white worm from inside its body. This worm, in three days, grows into a new Phoenix. The Phoenix takes the ashes of the old Phoenix to the sacred Egyptian city of Heliopolis (the City of the Sun), where its funeral rites take place. Then the new Phoenix flies to Paradise, where it lives alone for another five-hundred years. Only one Phoenix can live at a time. 3Smith, Evans Lansing, and Nathan Robert. Brown. The Complete Idiot’s Guide to World Mythology. Alpha Books, 2008.,4March, Jenny. Dictionary of Classical Mythology. Oxbow Books, 2014.

The Phoenix has long symbolized rebirth. However, in some accounts, the Phoenix simply dies, without a fire. The fact that the version that has endured involves the Phoenix being consumed by fire is owed to our enduring fascination with fire.

Phoenix, in Greek legend, is also the name of the son of Agenor, the King of Tyre or Sidon, and the brother of Europa, Cadmus, Cilix, Phineus, and Thasus. Along with his brothers, Phoenix went on a quest to find Europa, who had been abducted by Zeus. Phoenix is also sometimes claimed to be the father Europa.

As well, another Phoenix appears in Homers Iliad as the aged tutor of Achilles who goes along with the hero to the Trojan war. 5March, Jenny. Dictionary of Classical Mythology. Oxbow Books, 2014.