Meaning of Idiom ‘The Midas Touch’

The Midas touch is the ability to make money no matter what idea one tries; a gift for easily making money or being financially successful. 1Ayto, John. Oxford Dictionary of English Idioms. Oxford: Oxford U, 2010.,2Ammer, Christine. American Heritage Dictionary of Idioms. Boston: Houghton Mifflin Harcourt, 2013.

“Vance had the Midas touch. He started a business out of his garage and in a year he was a millionaire.”

“This young actor has the Midas touch, with every movie he becomes involved in breaking box office records and earning him millions.” 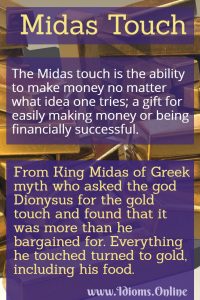 Midas is a figure from Greek myth who was the king of Phrygia, a part of Anatolia which is now Asian Turkey. He inherited the throne from his parents, the goddess Cybele and Gordius, his father. Midas’s foolishness causes him two distinct misfortunes, one in which he is given donkey ears by an angry god, and another in which he makes a very ill-advised wish.

Midas is a devotee of the god Dionysus whose followers are known to be given to revelry. One day, some Phrygians are working the fields when old Silenus, who is sometimes said to be a satyr, and who is a companion of Dionysus, wanders into the field drunk. The farmers take advantage of his drunken state and tie him up with chains made with flowers, leading him to King Midas.

Midas is delighted when he recognizes Silenus, whom he knows to be a follower of Dionysus. The king treats Silenus with great respect and orders a festival in his honor, before returning Silenus to Dionysus.

Dionysus is grateful to have his companion returned, and offers Midas a reward. Midas asks that everything he touches should be turned to gold. The god tries to warn him, and asks Midas, “Are you quite certain?” Midas replied that yes, he definitely wanted the gold touch. So, Dionysus granted his wish.

Midas soon found that the god had been true to his word. He picked up objects like flowers and pebbles and they turned instantly into gold. He even turned trees into gold by touching them. He set about planning all the things he would turn to gold, including his palace and his clothing. His day of gold-colored dreams ended at dinnertime. His servants brought his meal of bread and meat to him. When he broke off some bread, the bread turned to gold. When he tried to eat some meat, it turned to gold as soon as it touched his lips. He couldn’t even drink his wine. It turned to liquid molten gold when he tried to drink it.

Midas realized that he would starve amidst a fortune in gold. And he couldn’t even touch his children or wife. He prayed to Dionysus to please take the gift away, saying that he had indeed been foolish to ask for it. Dionysus agreed to take the gold touch away, telling Midas to go to the River Pactolus and bathe in it, so that the water would wash away the gift of gold. Midas did so, and the gold touch was lifted. Flecks of gold were found in the sands of the river from then on. 4Daly, Kathleen N., and Marian Rengel. Greek and Roman Mythology, A to Z. Chelsea House Publishers, 2009.,5Parker, Janet, and Julie Stanton, editors. Mythology: Myths, Legends, & Fantasies. Global Book Publishing, 2007.

There are many versions of this story, of course, and in some, he actually does turn his family to gold but is able to undo it with some of the water from the river.