“Many of us have lived in the shadow of Damocles’ sword for decades, knowing that nuclear weapons could be used at any moment.”

“Dennis had a cancer scare when he was young. The cancer may have been a misdiagnosis but for him, it became a sword of Damocles.” 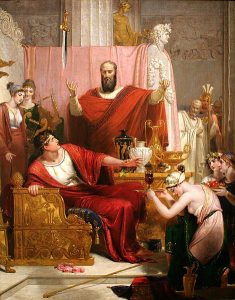 Damocles’ sword refers to the Greek legend about King Dionysius I of Syracuse and his courtier, Damocles, who was a person we would refer to today as a brown-noser.

The King had grown weary of Damocles’ constant flattery. When Damocles referred to the king as “the happiest of men” the Dionysius decided to teach him a lesson. He invited Damocles to a banquet and ordered him to sit in the same place for the entire event. Over the chair was hung a sword held by a single hair. In this way, the king demonstrated to Damocles just how precarious was the position of a king, who, although he had access to many luxuries and pleasant distractions, always lived in the shadow of fear. 4Ammer, Christine. American Heritage Dictionary of Idioms. Boston: Houghton Mifflin Harcourt, 2013.,5Westley, Peter Miles. The Bibliophile’s Dictionary: 2,000 Masterful Words and Phrases. Writer’s Digest, 2005