To cry wolf means to raise a false alarm; to warn of a danger that doesn’t really exist; to cry for help when you do not actually need help; to complain about something needlessly. 1Ammer, Christine. American Heritage Dictionary of Idioms. Boston: Houghton Mifflin Harcourt, 2013.,2Jarvie, Gordon. Bloomsbury Dictionary of Idioms]. London: Bloomsbury, 2009.,3Spears, Richard A. McGraw-Hill’s American Idioms Dictionary. Boston: McGraw Hill, 2008.

This idiom often implies that one has “cried wolf” many times and that as a consequence no one will listen to this individual when real trouble occurs.

“Nobody is going to listen to him. He’s cried wolf too many times.”

“Every time she gets into a shouting match with the neighbors she calls the police. You’d think they’d be tired of her crying wolf all the time.”

“You know what happens when you cry wolf, don’t you? asked Dad. “Nobody will listen when you really do need help.”

“Helen’s not going to run away. She’s just crying wolf.” 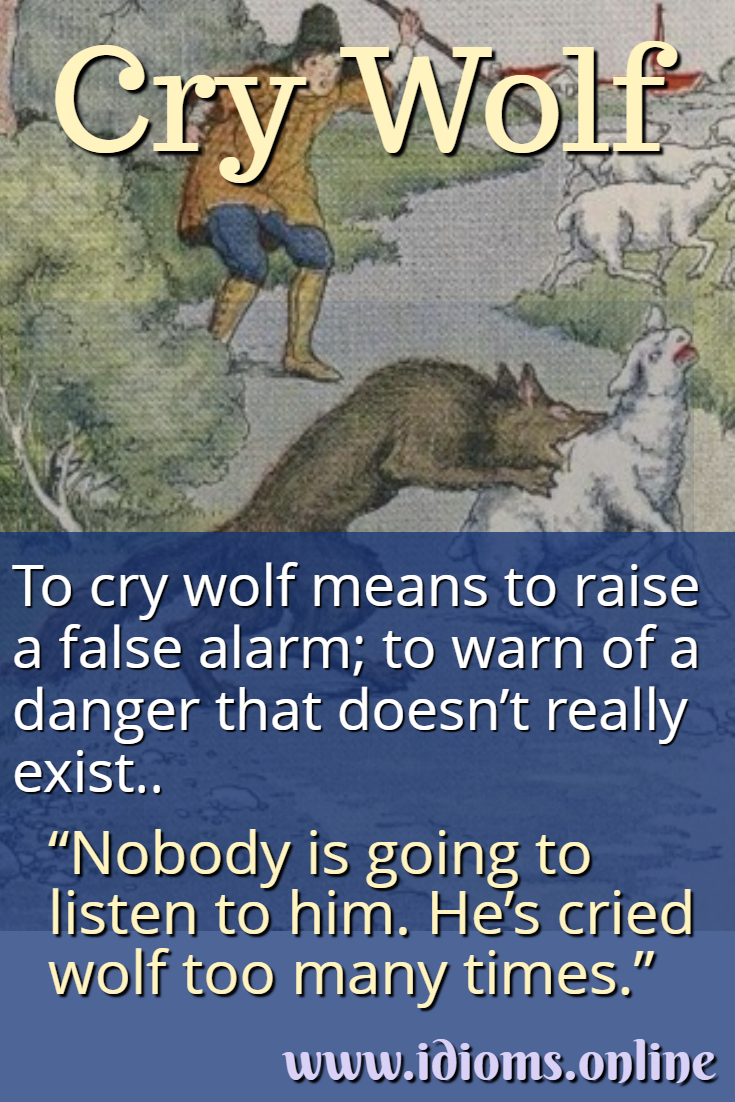 This idiom comes from the tale known as The Boy Who Cried Wolf, an Aesop’s Fable which appeared in a translation by Roger L’Estrange in 1692. In the tale, a young shepherd was watching his sheep and growing fearful, or perhaps simply to amuse himself, cried “Wolf!” causing frightened villagers to come to his aid. The boy repeated his false cry several times causing the people to respond to his false alarm each time until, when a real wolf finally appeared, the villagers ignored his cries, thinking he was simply “crying wolf” again. Since the mid-1800’s this expression has been applied to any false alarm, especially a repeated one. 4Ammer, Christine. American Heritage Dictionary of Idioms. Boston: Houghton Mifflin Harcourt, 2013.,5Jarvie, Gordon. Bloomsbury Dictionary of Idioms]. London: Bloomsbury, 2009.