Meaning of Idiom ‘Fall off the Wagon’

To be on the wagon means to be abstaining from alcohol or drugs, especially when one has an alcohol abuse problem. To fall off the wagon is to resume drinking after some period of time of abstaining. 1Heacock, Paul. Cambridge Dictionary of American Idioms. Cambridge: Cambridge UP, 2010.,2Ammer, Christine. American Heritage Dictionary of Idioms. Boston: Houghton Mifflin Harcourt, 2013.,3Spears, Richard A. McGraw-Hill’s American Idioms Dictionary. Boston: McGraw Hill, 2008.

Fall off the wagon is often shortened to (to be) off the wagon. Both on the wagon and off the wagon date from the same period. Although both expressions tend to be used in regards to drinking problems, they can be used in much less serious circumstances, even when one does not have an alcohol abuse problem but has decided to stop drinking alcohol or started drinking it again. The idiom has been extended to abstaining from or resuming the use (and abuse) of recreational drugs. When one falls off the wagon, the implication is usually that one has resumed drinking quite recently but the expression could refer to any time in the past. When a person has abstained from alcohol for a long period of time, perhaps years, they would likely have stopped using the idiom and would say simply “I don’t drink,” or something similar.

“I’ve been off the wagon for a month now.”
“I’m on the wagon so I’m going to stick with lemonade.” 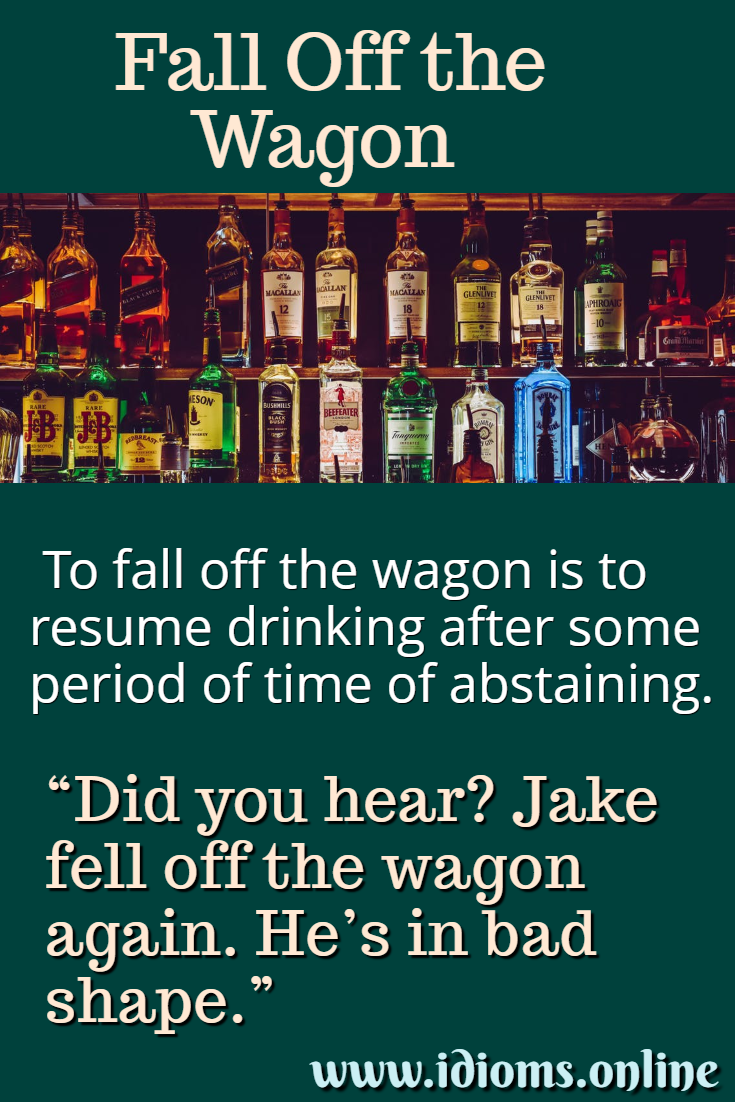 “Did you hear? Jake fell off the wagon again. He’s in bad shape.”

“Aren’t you having a drink, asked Jane? “No, I’m off the wagon for now,” said John. “Alcohol gives me heartburn.”

“You’re having a beer? asked Frank. “Yeah, I’m off the wagon. I already gave up smoking. Giving up beer at the same time was too much!” said Greg.

“Listen, said Jen, “when Marissa comes over, don’t offer her any wine. She’s on the wagon.”

“Vic has gone off the wagon again. I heard he’s back to shooting heroin. It was only a matter of time.”

On the wagon, dating from around 1900, is a shortened version of on the water wagon, which referred to horse-drawn wagons with water tanks used to spray dirt roads to keep down the dust. The opposite, off the wagon dates from the same time period. 4Ammer, Christine. American Heritage Dictionary of Idioms. Boston: Houghton Mifflin Harcourt, 2013.