Meaning of Idiom ‘Got Your (or someone’s) Number

When you have got someone’s number, it means you know their true character or intentions and thereby have an advantage. 1Ayto, John. Oxford Dictionary of English Idioms. Oxford: Oxford U, 2010,2Ammer, Christine. American Heritage Dictionary of Idioms. Boston: Houghton Mifflin Harcourt, 2013.

Although this idiom is often given as ‘get someone’s number’ there is actually no such idiom. We never say “I will get your number.” Instead, the present perfect “I have got” is almost always used. The past perfect is possible also, as in “I had got.”

Got, here is used to mean the same thing as have, which can also be used as a variant. To say “I’ve got your number” means “I have your number.”

When you have someone’s number, you know what kind of person they are, you understand their true motivations or intent. When you know that someone is secretly trying to do something bad, then you have their number. 3McCarthy, Michael. Cambridge International Dictionary of Idioms. Cambridge University Press, 2002 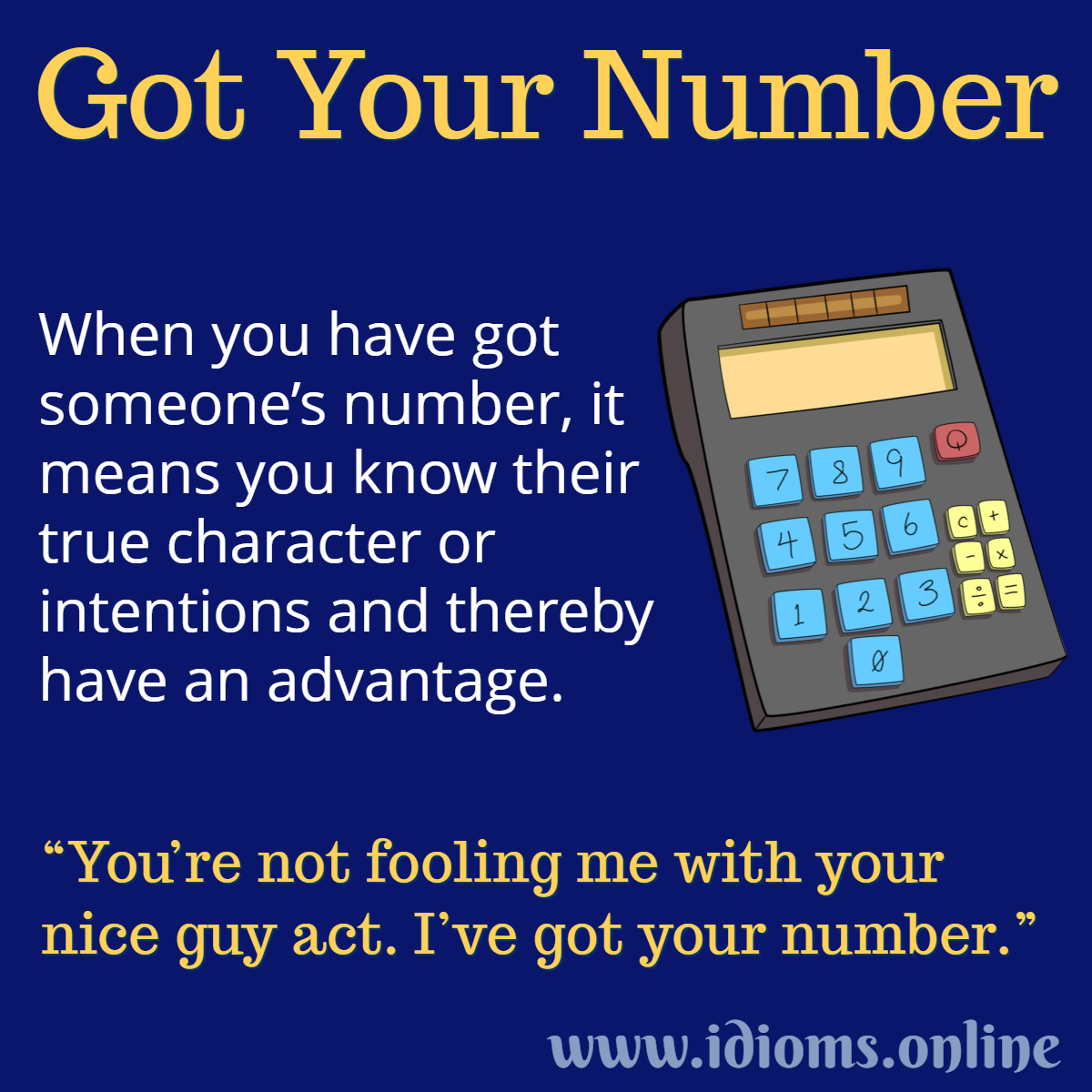 “You’re not fooling me with your nice guy act. I’ve got your number.”

“You have to be careful of Jander. He’s volatile, to say the least,” said Fran. “Don’t worry. I’ve got his number. A little flattery and he’ll be in the palm of my hand,” said Kirk.

“Everybody thought Earl was the salt of the earth, but I had got his number within minutes of meeting him.”

“Do you think I just fell off the turnip truck? I have your number. I know you just want a position in the cabinet.”

Having someone’s number in this expression has nothing to do with telephones. This idiom has been used since the mid-1800s, before most people had their own telephones or telephone numbers. Instead, number is used in the sense of a precise appraisal. To have someone’s number alludes to having figured them out precisely. 4Ammer, Christine. American Heritage Dictionary of Idioms. Boston: Houghton Mifflin Harcourt, 2013.

The idiom was used by Charles Dickens in Bleak House (1853):

“Whenever a person proclaims to you, ‘In worldly matters I’m a child,’ you consider that that person is only crying off from being held accountable and that you have got that person’s number…”