Meaning of Idiom ‘Cat Got Your (or one’s) Tongue’

This is usually expressed as a question to someone who is being unusually quiet or refusing to speak, as in “Has the cat got your tongue?” 1Ammer, Christine. American Heritage Dictionary of Idioms. Boston: Houghton Mifflin Harcourt, 2013.

Often used on children who are shy or who are being suspiciously silent, such as after they have done something wrong and do not want to admit to it. The full form is “Has the cat got your tongue” but it is often shortened to “Cat got your tongue?” This expression is simply an inducement to speak. When spoken to adults, it is sometimes humorous and at other times rude.

“I know you broke the vase,” said Mom to Billy. “Don’t you have anything to say? Has the cat got your tongue?”

“Well, aren’t you quiet today, Jane. What’s the matter? Cat got your tongue?” 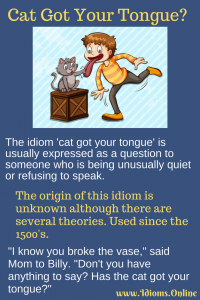 This quite odd idiom has been around since the 1500s but its origin is unknown, despite many theories. One claim is that the expression came from a Middle Eastern punishment for lying, in which the liar’s tongue was cut out and given to cats to eat. Another is that it has to do with the whip called the cat o’nine tails, which was used to flog sailors, who, because of fear of this punishment, would refuse to speak any secrets they may have known.  2Pare, May. Body Idioms and More: For Learners of English. United States?: Mayuree Pare, 2005.