Meaning of Idiom ‘Nothing to Write Home About’

When something is nothing to write home about it is unremarkable, ordinary, and not very exciting.

“I heard you got a promotion,” said Jamie. “It’s more of a lateral move,” said Thomas. “Nothing to write home about.”

“We tried that new restaurant everybody is buzzing about. I don’t get why everyone is so excited. It was nothing to write home about.” 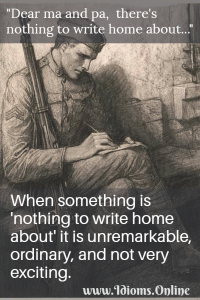 Used since the late 1800’s but becoming popular during World War I, the idiom possibly originated with troops who were stationed overseas and referred to unremarkable incidents that were not worth writing a letter home about.

From “A “Temporary Gentleman” in France: Home Letters from an Officer in the New Army:”

“It was a strange night, and I don’t think I’ll ever forget it, though there’s really nothing to tell; “Nothing to write home about,” as the men say.”

The men are presumably fellow soldiers and this example seems to indicate that the expression was common among soldiers stationed abroad.

Note on image: The artwork used in the image above is a charcoal drawing by Theodore Wladyslaw, depicting an American soldier in uniform, holding a rifle, and writing a letter. He is writing a love letter, not a letter home to his parents.