An old chestnut is an old joke, story, saying, pun, etc. that has been repeated so many times it is no longer funny or interesting; a cliche. 1Ammer, Christine. American Heritage Dictionary of Idioms. Boston: Houghton Mifflin Harcourt, 2013.,2Ayto, John. Oxford Dictionary of English Idioms. Oxford: Oxford U, 2010.,3Kirkpatrick, Elizabeth M. The Wordsworth Dictionary of Idioms. Ware: Wordsworth, 1995.

“Hey, Jane, see that cemetery? People are just dying to get in there!” said Dad. “Not that old chestnut again,” replied Jane.

“Two fish are in a tank. What did one fish say to the other fish?” asked Jane. “How do you drive this thing?” said Dad. “It’s an old chestnut.” 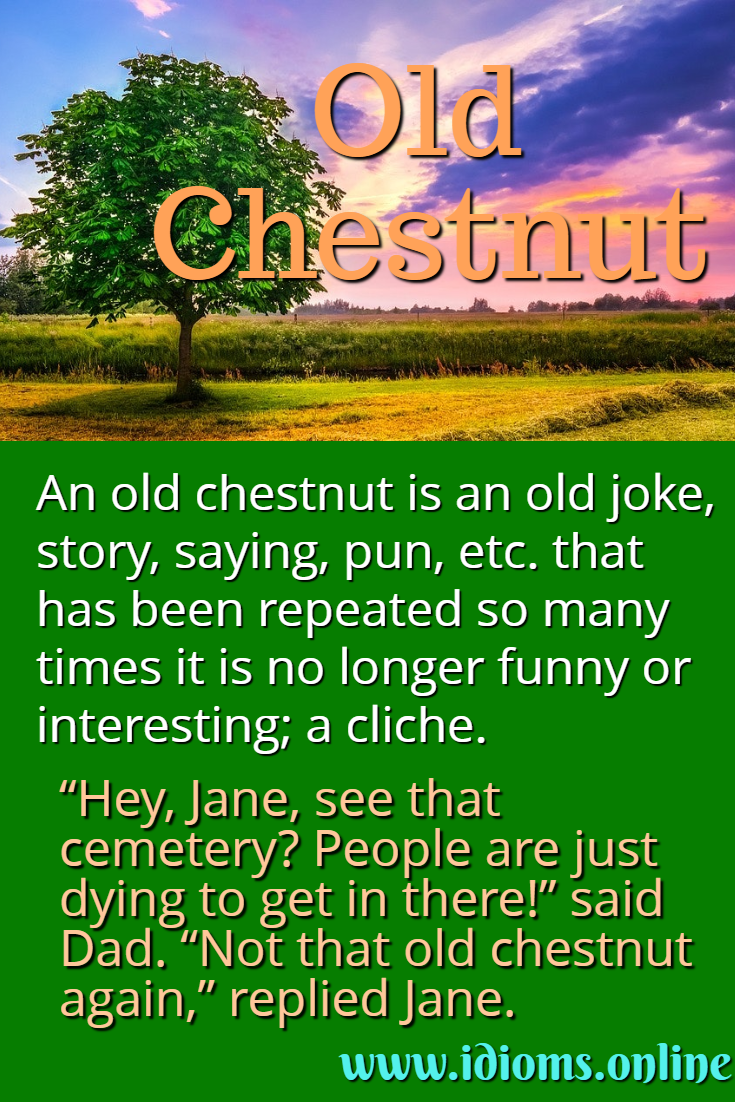 This idiom probably originated from William Dimond’s 1816 play Broken Sword, where a character, Zavior, had been telling the same stories over and over.  4Ammer, Christine. American Heritage Dictionary of Idioms. Boston: Houghton Mifflin Harcourt, 2013.,5Ayto, John. Oxford Dictionary of English Idioms. Oxford: Oxford U, 2010.,[note]  He begins to tell one about a tree when he’s interrupted by Pablo:

ZAVIOR: …At the dawn of the fourth day’s journey, I entered the wood of Collares, when suddenly from the thick boughs of a cork tree….

PABLO: (Jumping up) A chestnut (sp.), Captain, a chestnut.

PABLO: And I swear. A chestnut…Captain! this is the twenty-seventh time I have heard you relate this story, and you invariably said, a chestnut, till now.

ZAVIOR: Did I? Well, a chestnut be it then….