Also: Tell it to the marines

Meaning of Idiom ‘Tell That to the Marines’

Tell that (or it) to the Marines is an interjection used to express disbelief or incredulity. 1Ayto, John. Oxford Dictionary of English Idioms. Oxford: Oxford U, 2010.,2McIntosh, Colin. Cambridge Advanced Learner’s Dictionary. Cambridge University Press, 2013.

“I once saw an alligator climbing a tree,” said George. “Tell that to the Marines!” said Sam.

“The new tax bill will stimulate the economy and put money in workers’ pockets,” said the Senator. “Tell it to the Marines!” said his opponent. 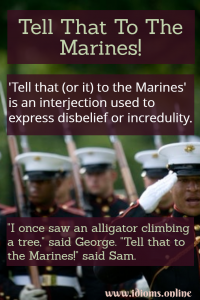 Tell it to the marines is part of a longer expression from the 1800’s, tell that to the marines, because the sailors won’t believe it. This expression has nothing to do with the United States Marines nor any modern marine force, although it does related to marine forces from the 1700’s-1800’s, such as the U.K. Royal Marines, formed in 1755 out of the maritime regiment.

This phrase is often claimed to have originated in a conversation that King Charles II had with Samuel Pepys about the existence of flying fish having been confirmed by one of the king’s Maritime Regiment members. This story was actually invented by W. P. Drury who probably knew that the full expression was based on a sailors’ joke marines were so unintelligent they would believe almost anything they were told.

In 1823 Byron confirmed that will do for the marines, but the sailors won’t believe it as an old saying.

Sir Walter Scott, in 1824, used the phrase in his novel Redgauntlet.

Another version of the original expression was tell that to the horse marines…. Horse marines were an imaginary regiment of mounted calvary who sat upon their horse onboard ship, a ridiculous image no doubt intended to reinforce the notion that marines were dimwitted. 3Ayto, John. Oxford Dictionary of English Idioms. Oxford: Oxford U, 2010.