Meaning of the Idiom ‘Like Two Peas in a Pod’

This idiom is used with the preposition like or the verb to be. For example:

Both variations carry the same meaning.

The other variations above are less common. 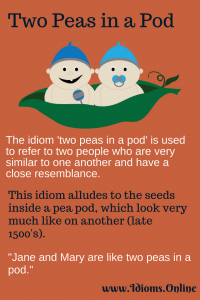 Used since the late 1500’s, this idiom alludes to the seeds inside a pea pod, which look very much like on another.