Meaning of Idiom ‘Bury One’s Head in the Sand’

To bury (your, his, her) head in the sand means to ignore obvious problems or dangers; to refuse to face unpleasant realities by pretending not to see them or know about them. 1Spears, Richard A. McGraw-Hill’s American Idioms Dictionary. Boston: McGraw Hill, 2008.,2Ayto, John. Oxford Dictionary of English Idioms. Oxford: Oxford U, 2010.,3 Kirkpatrick, Elizabeth M. The Wordsworth Dictionary of Idioms. Ware: Wordsworth, 1995.,

“There is obviously something wrong with you, said Joseph’s father. “You need to stop burying your head in the sand and go see a doctor.”

“The government can hide its head in the sand but climate change is real and we must deal with it.”

“Is Joseph going to the doctor?” asked Tracy. “No,” said Joseph’s father. “As usual, he has his head in the sand.”

“The senator buried his head in the sand, pretending not to be aware of the ongoing harassment problems.” 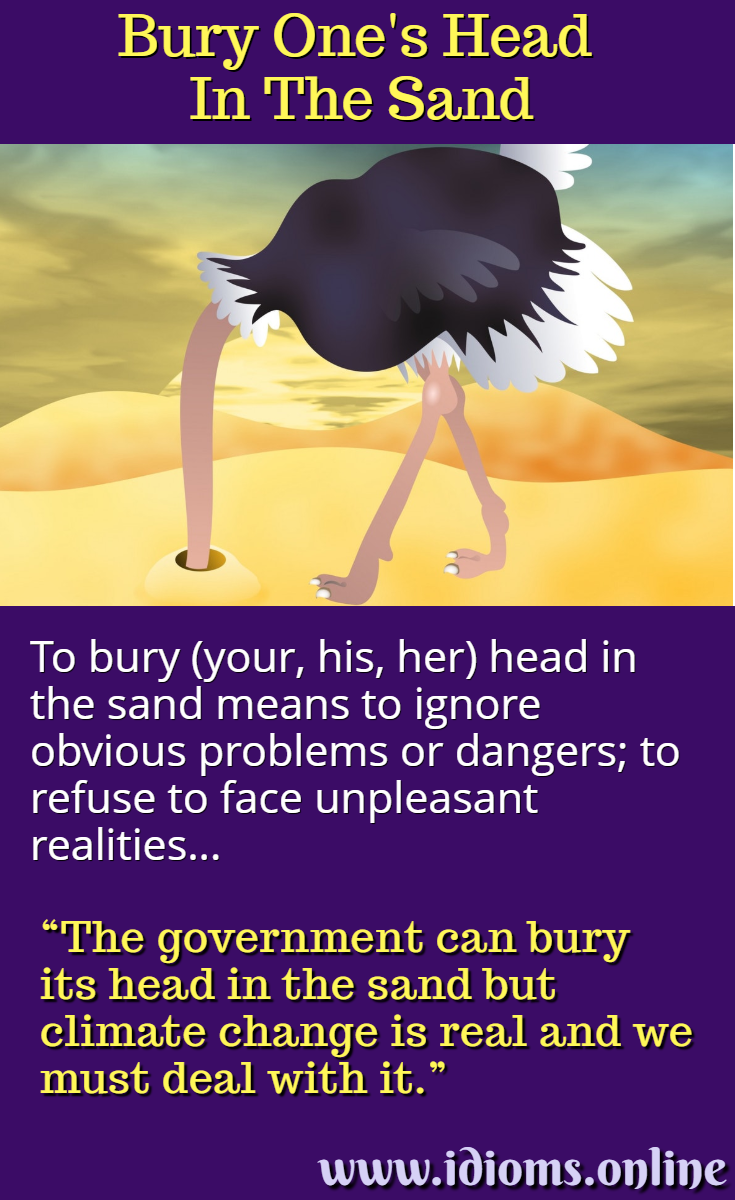 This idiom comes from the mistaken notion that ostriches bury their heads in the sand in response to danger because they think that if they are unable to see the danger, it does not exist. Another alternative explanation is that ostriches think that if they cannot see their surroundings, then they cannot be seen. Regardless, this old myth gave rise to the verbal expression during the early 1600s and, possibly because of its unusual and humorous nature, it is still used today. 4Ammer, Christine. American Heritage Dictionary of Idioms. Boston: Houghton Mifflin Harcourt, 2013.

When ostriches do burrow their heads in the sand, they are actually consuming gravel and sand as an aid in digestion, something common to many birds and reptiles which are gastroliths.