To go down in flames is a common English idiom that has several versions, including go up in flames, go up in smoke, and go down in smoke.

The expression is also interesting in that, while most idioms don’t share any real-world cognates, go down in flames could easily be confused with a literal event, describing a building being destroyed by fire.

Meaning of Idiom ‘Go Down in Flames’

1. To go down in flames means describing a building or other structure, means to be destroyed by fire. This phrase also describes a plane falling to the ground while on fire, which usually refers to a military plane having been shot down. To go down in smoke is an alternative version. To go up in flames, when used to describe an actual fire, describes something being entirely engulfed by flames. All these phrases can also be used figuratively.

2. When we use the phrase go down in flames (or go up in flames, go down in smoke) figuratively, we are referring to something ending or failing suddenly and perhaps spectacularly. We often hear of a business “going down in flames.” Unfortunately, we might actually think a fire occurred. Both expressions are easily confusable with literal statements. Most of the time, however, it is easy to tell when the phrase is being used metaphorically. 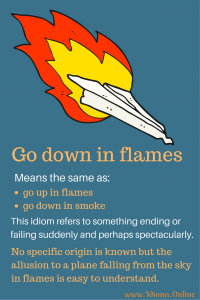 “His house went up in flames but luckily no one was home when it happened.”

“My grandfather’s plane went down in flames during the war, but he managed to eject and parachute safely to the ground.”

“He had a promising athletic career, but it went up in flames after he injured his knee.”

“They were on a winning streak, but the whole team seemed to go down in flames after their star player was injured.”

To go down in flames seems to call on a literal vision of a plane falling from the sky in flames, crashing and burning. This phrase, usually describing military planes having been shot down, was used commonly by around 1915. It is unclear whether the same phrase being used to describe buildings or other structures being destroyed by fire was common prior to the advent of aircraft or whether the expression as used to describe falling planes passed into use regarding structures on the ground. To go down in smoke is an alternative version and perhaps just as common, since falling planes are more likely to emit smoke than actual flames. At some point, all these phrases passed into figurative use.