A herculean task is an extremely difficult task; an almost impossible undertaking.

“The President informed the people that they had a Herculean task before them.”

“The building of the Great Pyramids of Egypt must have been a Herculean effort.”

“The professor set about the Herculean task of translating the forgotten language.” 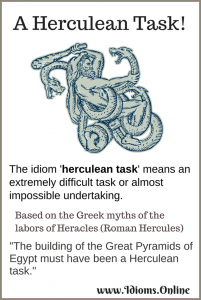 The idiom ‘Herculean task’ is based on the Greek and Roman myth of Heracles/Hercules, by far the greatest hero and popular figure in Greek mythology, usually known in the West as Hercules. Originally named Alcides, he was the illegitimate son of Zeus and a mortal woman. Hercules grew to be immensely strong and was honored by the Gods. By the time he was grown he was already a renowned hero and had had many adventures. However, Zeus’ affair with a mortal woman had drawn the wrath of his wife, the Goddess Hera, who had been trying to torture Alcides since he was an infant. For example, she sent two serpents to kill him in his cradle. But, even as a baby, he strangled them both with his bare hands.

Eventually, though, Hera got to him. One night, she drove Alcides/Hercules to such a pitch of madness that he murdered his own wife and children. Once back to his senses, he was consumed by guilt. He committed himself to asylum and went to Thespius, who purified him of his crime.

Then, to find out what he should do, he went to the Oracle at Delphi, where Pythia, a vehicle of the God Apollo, gave predictions. It was Pythia who first called him Hercules (Heracles in the original Greek mythology).

Pythia told Hercules that he should go to Pythia and serve King Eurystheus for twelve years. After this time, he would become immortal. So, Hercules went to the king and became his subject. The king tasked him with twelve labors. Only after he accepted the deal did Hercules find out that each of the tasks appeared to be impossible to achieve:

Unfortunately for Hercules, his troubles were not over…

Mythology in Our Midst: A Guide to Cultural References
Opening Pandora’s Box: Phrases Borrowed from the Classics and the Stories Behind Them