This is one of a number of exaggerated idioms which take mundane situations and describe them in quite implausible ways.

To stink to high heaven means to have a very bad or unpleasant odor. Alternatively, it can sometimes mean to be highly corrupt, dishonest, unpleasant, or simply bad.

The expression is usually used to refer to actual odors and it is simply an exaggerated way of saying something smells bad. It can be used in a more figurative way, such as to refer to something that is ‘bad’ in some way. 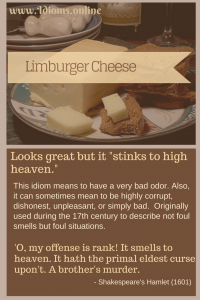 “The electricity went off while we were on vacation. When we got home and I opened up the refrigerator it stank to high heaven.”

“I don’t know how anyone can eat kimchi, it stinks to high heaven.”

“I can’t believe we’re doing this, the whole thing stinks to high heaven.”

The idea of a smell so bad it reaches to the sky and beyond makes this idiom quite effective in conveying its general idea. However, its original use during the 17th century was to describe not foul smells but foul situations.

The phrase shows up in Shakespeare’s Hamlet (1601) to describe a terrible deed:

Claudius: O, my offense is rank! It smells to heaven. It hath the primal eldest curse upon’t. A brother’s murder. (referring the Biblical murder of Abell by his brother Cain)