Also:
Blow your own trumpet
Toot your own horn/trumpet

Meaning of Idiom Blow You (or one’s) Own Horn’

To blow your own horn means to boast or brag about your achievements or talents. 1Ammer, Christine. American Heritage Dictionary of Idioms. Boston: Houghton Mifflin Harcourt, 2013.,2Ayto, John. Oxford Dictionary of English Idioms. Oxford: Oxford U, 2010.

This idiom is often used in the common phrase “Not to blow my own horn, but…” People say this right before they blow their own horn! However, it is often done in humor. 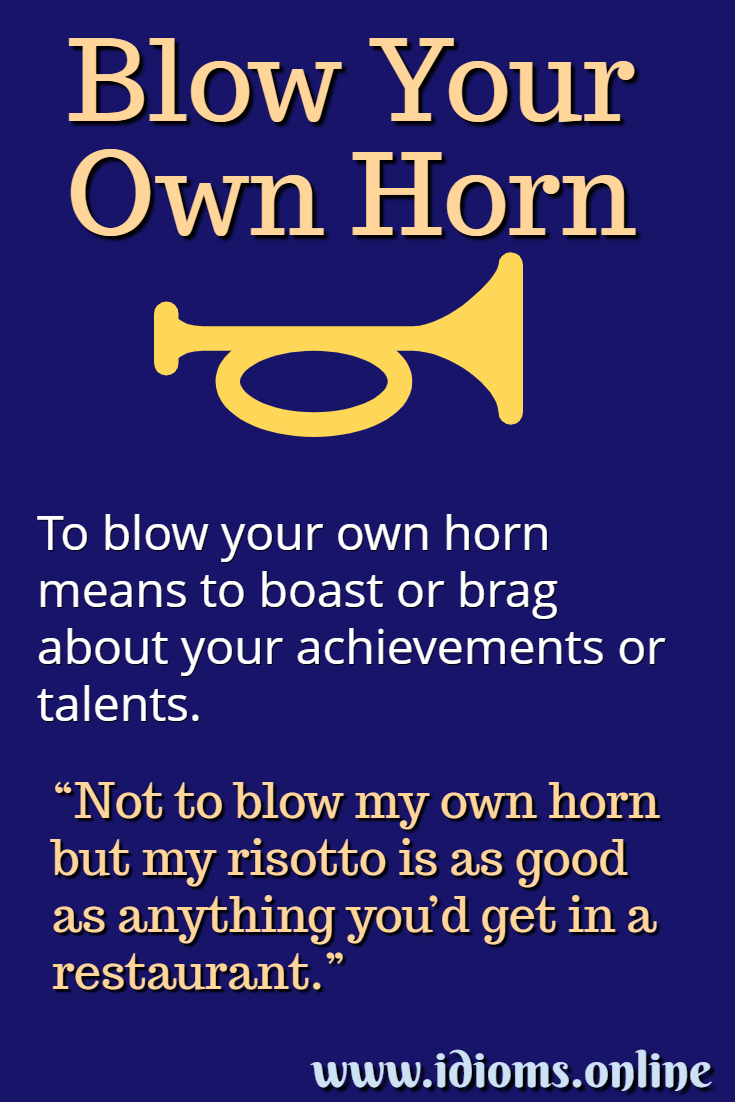 “I really don’t want to go to dinner with the Henderson’s again,” said Beatrice. “I could do without listening to William blow his own horn all night.”

“You know Harris is a great musician,” said Ben. “How so,” said Luke. “He’s really good at blowing his own horn.”

“Not to blow my own horn but my risotto is as good as anything you’d get in a restaurant.”

“Talk about blowing your own trumpet. One little award and Anthony never shuts up.”

This idiom probably originated with the practice of heraldry, probably in Germany, where the word blazon meant ‘to blow’ and in events where knights would engage in contests, blazonry was practiced.

Certain individuals called heralds assumed many roles in regards to knights. One of these roles was, as each knight in heraldry arrived at a tournament, to blow trumpets to attract attention and to give more grandeur to the ceremony, while other heralds would describe the knight’s heraldry, or their armorial bearings, and announce their various achievements.

If a knight were to ‘blow his own trumpet’ to announce his arrival, it would be a pompous knight indeed. 4Hulme, F. Edward. The History, Principles and Practice of Heraldry. Swan Sonnennschein & Co., 1892.