To be caught red-handed means to be caught while doing something wrong or illegal; to be caught committing a crime with all the evidence available.

“She was caught red-handed while shoplifting.”

“I tried to cheat on an important exam once, but I was caught red-handed by my teacher.”

“There is no point arresting him now,” said the detective. “We have to catch him red-handed.” 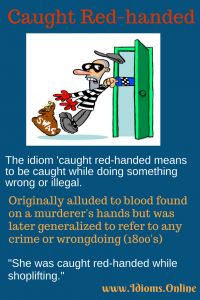 This idiom originally alluded to blood found on a murderer’s hands but was later generalized to refer to any crime or wrongdoing. 1Pare, May. Body Idioms and More: For Learners of English. United States?: Mayuree Pare, 2005.,2Ammer, Christine. American Heritage Dictionary of Idioms. Boston: Houghton Mifflin Harcourt, 2013.