This expression is one of a surprising number of idioms with the word pants in them.

To be caught with your pants down means to be caught unawares in a situation to which you are completely unable to respond, react, etc. This expression means much the same as being a “deer in the headlights” except that the situation of the person caught with their pants down is highly embarrassing or potentially damaging, etc. This often involves a sexually compromising situation or something else one should not be doing. As well, it can simply mean that someone is unprepared to act and this lack of preparation is bad for their reputation, career, etc.

Someone being pants-free is not required for using this idiom.

“After spending years shouting about morality and family values, the governor was caught with his pants down when a reporter asked him about his own affair.”

“We better post an extra guard tonight.” said the sergeant, “we don’t want to get caught with our pants down again.”

“The phone call from work caught me with my pants down, I was already well into a six-pack of beer.” 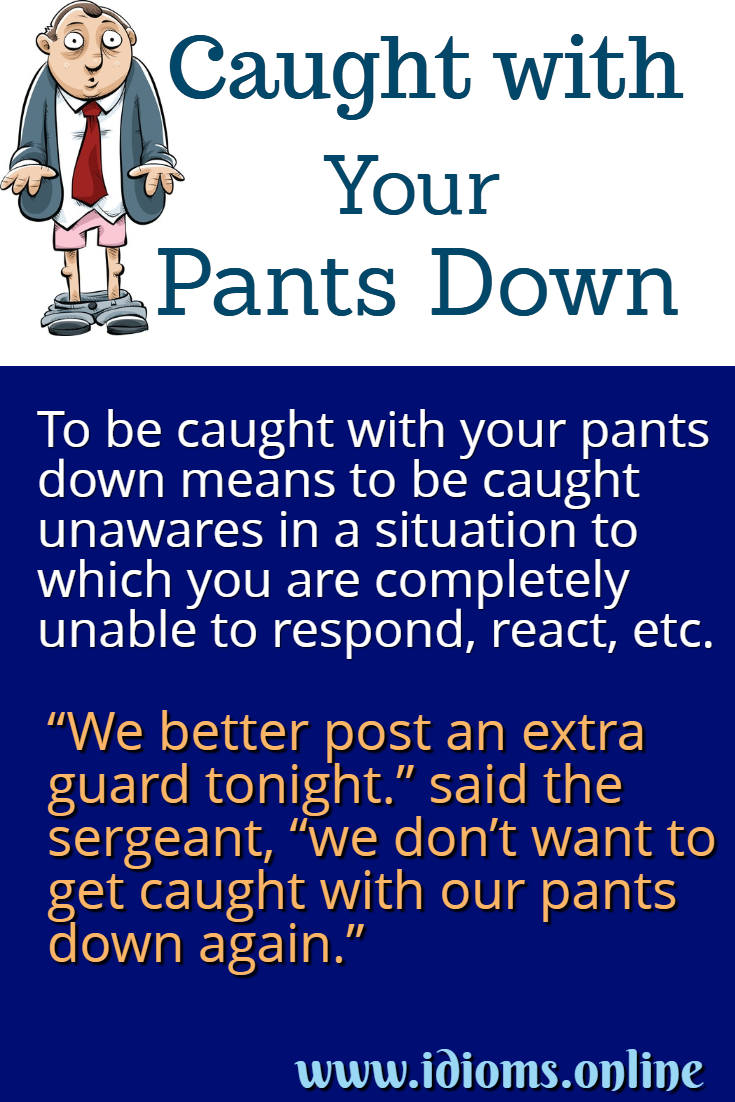 If for some reason you had your pants down, perhaps to relieve yourself, and you suddenly found yourself in the company of others, you’d probably feel embarrassed, in a dangerous situation, and a bit helpless. After all, it’s hard to run with your pants down. This is the figurative origin of this expression.

As for more historical origins, there are a few proposed. The most popular one involves the death of Caracalla, a.k.a. Marcus Aurelius Severus Antoninus Augustus, who was Roman Emperor from 198 to 217. While on an important trip he took a break to urinate on the side of the road. His bodyguards went off a little distance or turned their backs, etc. in order to give the Emperor a bit of privacy. While the deed was being done, and the armed guards were not watching, a guy named Julius Martailis took advantage of the situation, rushed in, and stabbed the emperor in the back, killing him. Martailis then tried to run but one of the guards managed to shoot him with an arrow. Here, Caracalla was literally caught with his pants down.

Another, more general origin story says that frontiersmen, traveling about, were always wary of ever-present danger. They couldn’t even relieve themselves without risking someone taking advantage of this inopportune moment. So, they would take a weapon with them even when that had to go. They might get caught with their pants down, but they weren’t going to be caught with their pants down!

The third story, itself a movie trope, involves a two-timing husband caught with another woman…with his pants down. Although the first story seems to be the most credible, it is possible that the idiom grew from shared experience.