To be caught with one’s hand in the cookie jar means to be caught in the act of doing something wrong or forbidden, especially stealing money from one’s employer. 1Ammer, Christine. American Heritage Dictionary of Idioms. Boston: Houghton Mifflin Harcourt, 2013.,2Ayto, John. Oxford Dictionary of English Idioms. Oxford: Oxford U, 2010.,3Pare, May. Body Idioms and More: For Learners of English. United States?: Mayuree Pare, 2005.

This idiom is often but not always used to refer to stealing money from an employer and is similar to the idiom caught with one’s hand in the till. It may also be used in a more general sense, similar to caught red-handed.

“I had to get rid of my assistant manager,” said Mr. Roberts, “he had his hand in the cookie jar.”

“He was everyone’s favorite athlete in college until they found out he got caught with his hand in the cookie jar, accepting lavish gifts from scouts.”

“I think my bookkeeper has his hand in the cookie jar.” 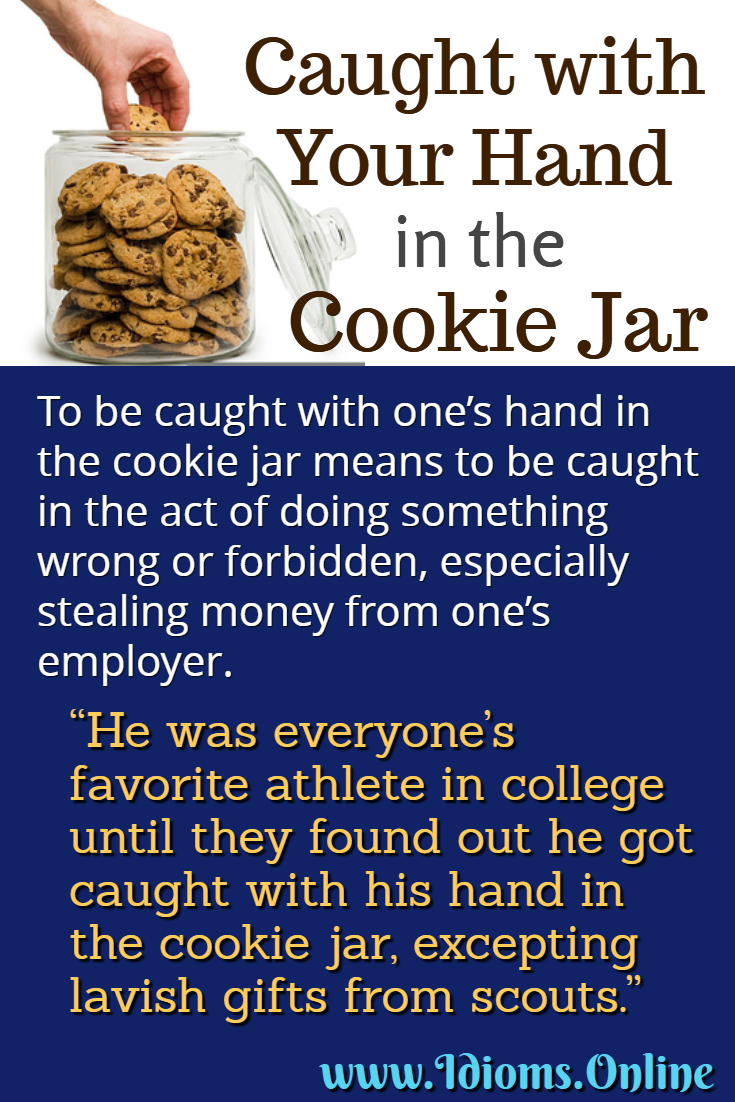 This idiom is chiefly North American 4Ayto, John. Oxford Dictionary of English Idioms. Oxford: Oxford U, 2010., as the British use the word biscuit instead of cookie, and there is no corresponding British expression. A canister of ceramic or other material used to store cookies has been a tradition in American households and children are usually forbidden to access this cookie jar until given permission to do so. Since cookies are irresistible to children, they are often ‘caught with their hand in the cookie jar’ by their parents. This feature of the American culture, combined with the idea of treats and money both being tempting, caused the expression to be extended to refer to the stealing of money, and also to more general uses. 5Pare, May. Body Idioms and More: For Learners of English. United States?: Mayuree Pare, 2005.