Meaning of Idiom ‘Jump the Shark’

1. When a television series reaches a point where it includes unlikely, ridiculous or far-fetched events in a desperate attempt to stay entertaining or maintain novelty. 1Ayto, John. Oxford Dictionary of English Idioms. Oxford: Oxford U, 2010.

2. To do something ridiculous or questionable out of desperation to get attention or remain popular. 2Bengelsdorf, Peter. Idioms in the News – 1,000 Phrases, Real Examples. N.p.: Amz Digital Services, 2012.

This idiom is usually used in regards to television shows, as in the first definition, when having ‘jumped the shark’ signals that the series has reached its peak and is declining in quality. 1 The expression is sometimes used in a more general sense, as in the second definition.

“When the main character was killed and then brought back to life, I knew the show had jumped the shark.”

“The governor likes to talk tough, but he really jumped the shark when he suggested that all liberals should be shot.” 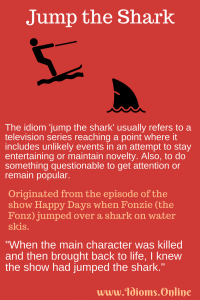 Unlike most origins, this idiom can be absolutely traced to a single event, which occurred on the popular 1970’s television series, Happy Days. Happy Days had run for four seasons and had been very successful, but its viewership was declining. In 1977, on the first episode of the fifth season, when the characters are visiting Los Angeles, the character Fonz (Fonzie, the Fonz – played by Henry Winkler) receives a challenge to his bravery. Pulled by a boat driven by character Richie Cunningham (Ron Howard), Fonzie, in swim trunks and his usual leather jacket, water skis with the intention of jumping a ramp, but ends up, in the process, jumping over a shark.

This scene is not only notable in that jumping over a shark on water skis is a ridiculous notion, but it portrays the established character development of Fonzie. First, there is no reason to believe that Fonzie could water ski at all. Second, in, an earlier episode Fonzie attempted to jump over 14 barrels on his motorcycle and seriously injured himself. Afterward, he had confessed that he had been stupid to attempt such a stunt just to show how brave he was. Henry Winkler was, however, an accomplished skier in real life so part of the motivation for the scene may have been to take advantage of these skills.

It should be noted, however, that not only did the Happy Days ‘jump the shark’ episode enjoy good ratings, but the series continued for six years with great success. The idea that everything “wen’t downhill” after this episode is subjective and the idea was primiarly championed years later, during the 1990s, by radio personality John Hein.