Meaning of Idiom ‘Dead as a Doornail’

Dead as a doornail can refer to actual deceased persons, or to anything that is not used anymore or not able to be used anymore and thus is “dead.” The latter more figurative usage usually refers to issues or ideas. 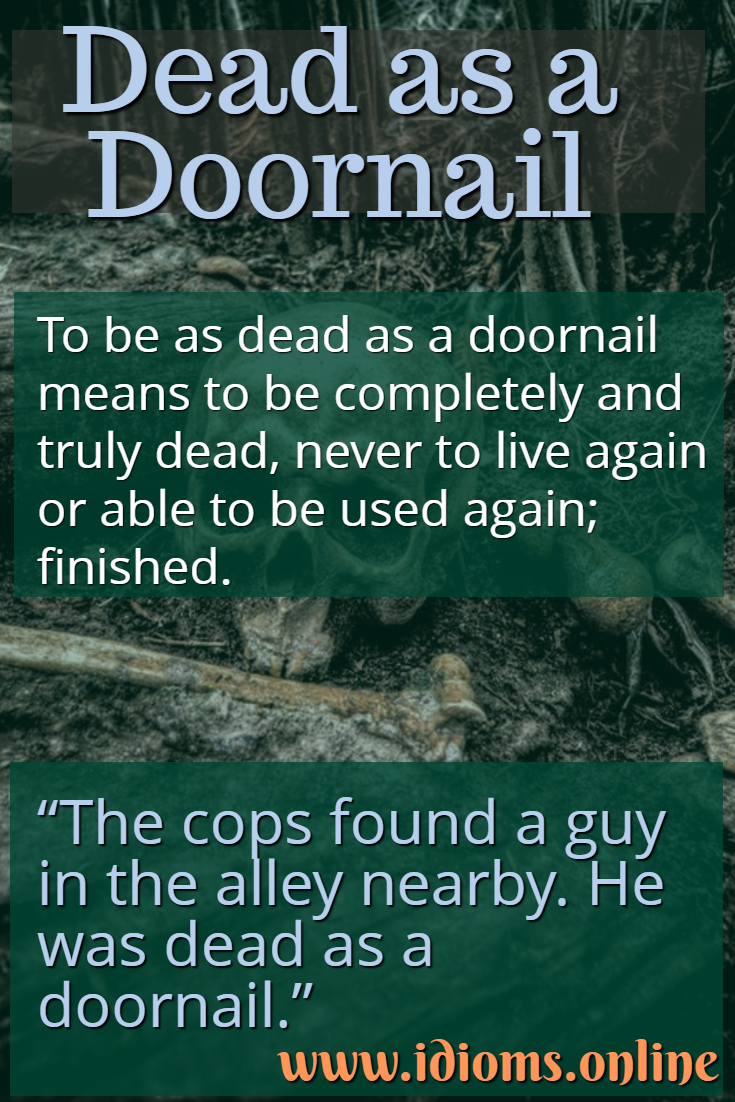 “The cops found a guy in the alley nearby. He was dead as a doornail.”

“Some people are afraid our democracy is dead as a doornail.”

“This store really has a lot of flip phones. I thought those were dead as a doornail.”

A doornail was a large iron hand-made nail used to put doors together. It is unclear, however, how a doornail became associated with death. As Rex Trulove postulates, this expression could be related to the way in which doornails were used. They were hammered through the door and the end of the nail was hammered over to clench or secure the nail. Since these handmade nails were not able to be straightened and used again after this, as they would usually break, they were considered dead. This would fit the simile, as something as ‘dead as doornail’ is not useful for any other purpose. 3Trulove, Rex. “Where Did the Idiom ‘Dead as a Doornail’ Come From?” Virily, 28 Oct. 2017, virily.com/culture/where-did-the-idiom-dead-as-a-doornail-come-from/.,4Ammer, Christine.  American Heritage Dictionary of Idioms. Boston: Houghton Mifflin Harcourt, 2013.

However, the problem with this and any other theory of this idiom’s origin is that it does not account for the other contemporary idioms which used doornail, such as deaf as a doornail, dumb as a doornail, and dour as a doornail. One thing all these have in common is the alliteration. Dead as a doornail was undoubtedly the earliest, alluding to the above, and the other idioms sprung up based on this idiom and were helped along by the pleasing alliteration.

Other versions of the idiom are more transparent.

Both of these are later idioms, the first dating from the 16th century and the second from the early 1900s.