Meaning of Idiom ‘Ships That Pass in the Night’

Two ships that pass in the night can have one of two meanings. More generally, it refers to individuals who know each other, are related, or intimate, but are not usually in the same place at the same time. A more dramatic and literary usage refers to two people who meet and have an intense romance for a short time, only to part and never see one another again. Sometimes, as well, the idiom simply refers to any individuals who meet and associate for a short time and then part. 1Jarvie, Gordon. Bloomsbury Dictionary of Idioms. London: Bloomsbury, 2009.,2Ammer, Christine. American Heritage Dictionary of Idioms. Boston: Houghton Mifflin Harcourt, 2013.

“My wife leaves for her overnight shift just as I get home from work. We’re like two ships that pass in the night.”

“Jane thought about Ron for years but to him, they were just ships that passed in the night.” 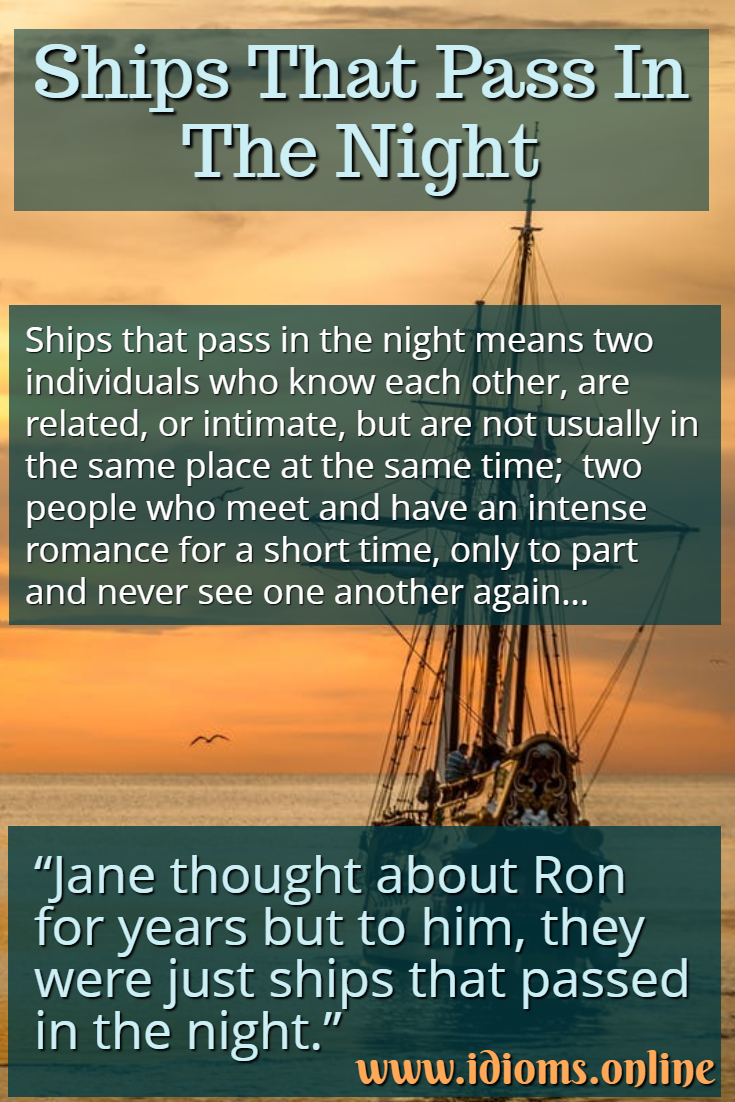 The allusion here, to two ships passing silently by one another in the night, is obvious. The idiom can be traced to H.W. Longfellow’s Tales of a Wayside Inn in 1874 3Jarvie, Gordon. Bloomsbury Dictionary of Idioms. London: Bloomsbury, 2009.,4Ammer, Christine. American Heritage Dictionary of Idioms. Boston: Houghton Mifflin Harcourt, 2013.:

“Ships that pass in the night, and speak each other in passing,
Only a signal shown and a distant voice in the darkness;
So on the ocean of life, we pass and speak one another,
Only a look and a voice, then darkness again and a silence. ”